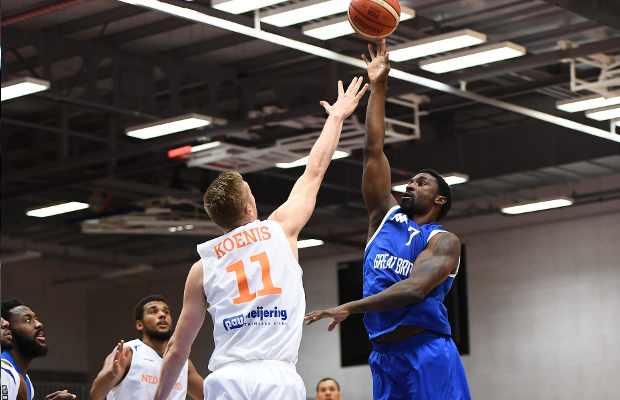 Great Britain’s Senior Men failed to claim their first win of the summer in their final preparation game ahead of the EuroBasket 2017 Qualifiers as they were beaten 79-68 by the Netherlands at the National Basketball Performance Centre, in Manchester, on Saturday evening.

Joe Prunty’s side had lost four straight games – including an 83-71 loss against the same opponents on Friday – but made a strong start only to fall to an 11-point loss, four days before they face Hungary.

Andrew Lawrence top scored with 14 points on his return to action, while Ben Gordon added 13 points – all in the second half – and Dan Clark recorded nine points and 12 rebounds.

Clark – who was also back in action – scored four early points in an 8-2 start for GB and consecutive 3-pointers from Teddy Okereafor would extend the lead beyond double figures.

Lawrence stepped up off the bench and made an immediate impact with five points to help make the score 23-12 at the end of the first period.

GB led by as many as 13 points after an early basket from Eric Boateng, but the visitors began to claw their way back into the game.

Two triples from Kieron Achara were countered by three from the Dutch and GB went into half-time with a reduced advantage of four points, at 41-37.

The Netherlands surged ahead before Gordon went 3-6-9 in a 13-2 run to help put GB up by nine at 54-45. However, there was to be another twist and the visitors re-took the lead with a 61-60 advantage ahead of the final 10 minutes.

GB were slow to get going in the fourth and found themselves down by 11 before Lawrence stopped the rot after almost four minutes.

The 2012 Olympian continued to lead the resistance and helped his side close within five points, but the deficit was too great to overcome as GB fell short.

GB are next in action against Hungary for their first of six EuroBasket 2017 Qualifiers with the 15-man squad cut down to 12 before Wednesday’s opener.