GB U20 Women Take Fifth Place at U20 Div B Euros - Hoopsfix.com

GB U20 Women Take Fifth Place at U20 Div B Euros 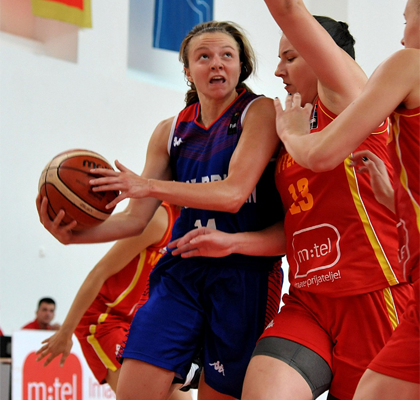 Great Britain wrapped up their participation at the FIBA U20 Women’s European Championship Division B 2016 on a high note by defeating the hosts Montenegro 63-46 to take fifth place.

Having been beaten by Montenegro earlier in the tournament 75-58, Great Britain were able to extract revenge as they reeled themselves back into the contest after a quick-fire start by their opponents who had led 17-10.

The second quarter proved to be eventful for all the right and wrong reasons. The latter involved a lengthy stoppage to the game as Kennedy Leonard was given treatment for a fall/collision while going to the basket. Her team-mates stepped up in the wake of her injury and by half-time, had turned the situation around by moving 27-26 ahead, with Georgia Gayle leading the way in points, rebounds and assists.

The interval didn’t disrupt the momentum of GB as they went on to produce some of their best basketball of the tournament to streak away from Montenegro with a superb 19-7 third quarter. It was a lead they would not relinquish as they eased to victory.

The final position of fifth place and a record of 3-3 represents an improvement last summer at the event, which harvested one victory. Notably two of the three defeats this time around came against the two strongest and already promoted teams in Lithuania and Slovenia.