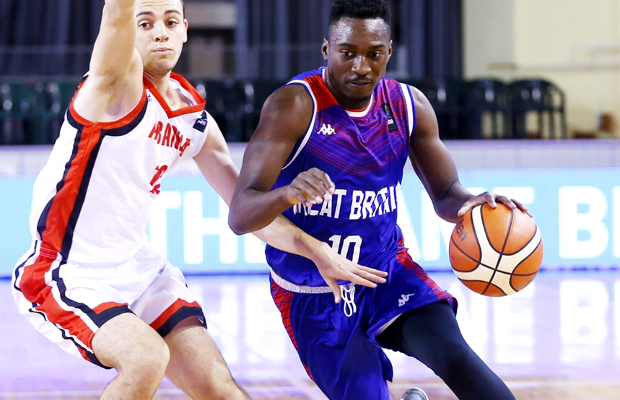 Great Britain Under-20’s remain undefeated at the European Championships in Chalkida, Greece, after recording their third straight win with a 72-58 success against Kosovo, on Sunday morning.

Andreas Kapoulas’ side put in another strong defensive shift as they move top of Group C with a perfect 3-0 record, edging closer to securing a top-two spot.

Pharroh Gordon top scored with 17 points including 11 in the third period, while captain Jules Dang Akodo produced another impressive all-round effort with a double-double of 15 points and 10 rebounds along with seven assists.

“It was just a matter of being more consistent in our performance,” said Head Coach, Kapoulas.

“We did good things, created good shots inside and out and made consecutive defensive stops. We need to build that consistency.

“Overall what matters at this moment is the win. We talked about having three wins going into the rest day. We have the three wins and the focus now is getting ready for the big game against the Netherlands on Tuesday.

“Jules is our team leader, our captain and he has been showing great leadership on and off the court to make sure the guys are ready.”

Dang Akodo opened the scoring with a 3-pointer, but Kosovo responded with the next six points to edge ahead in a closely fought opening period.

With both teams struggling from beyond the arc, GB found success inside with Sam Idowu making three of his first four shots as they finished the first quarter trailing 13-11.

GB came out stronger in the second with a 10-2 run that included a triple from Deane Williams and was capped by Kingsley Nwagboso’s three-point play.

Fraser Malcolm stepped off the bench to add a three and when Dang Akodo netted his second from downtown, the lead had reached double figures at 29-19.

Kosovo began to reduce the gap and hit back-to-back triples before adding another before the half-time buzzer, although GB still went into the interval in command with a 34-28 advantage.

GB continued to assert their control in the third and really began to punish their opponents on the fast break as they used a 13-2 burst to open up their biggest lead of the game at 47-32 with Gordon scoring eight points during the run.

The College of Saint Rose forward took his tally beyond double figures for the quarter in the midst of a 10-3 run from Kosovo as GB’s lead was cut to eight heading into the fourth, 50-42.

Sedale Hanson-Young broke GB’s duck early in the fourth and their double digit advantage was restored shortly after. However, a quickfire 5-0 response from Kosovo halved the deficit and forced Kapoulas into a time-out with his side leading 54-49 with 5:49 remaining.

Callum Lawson scored straight out of the time-out, converting a three-point play, and that was followed by triples from Gordon and Dang Akodo to close the door on any possible comeback.

Carey joined in on the scoring from downtown, adding five points in quick succession and Dang Akodo moved to 15 points with the final score as GB rounded out a 14-point victory.

GB scored 22 fast break points and claimed 11 steals during the contest, whilst shooting 7-of-28 from beyond the arc and winning the rebounding battle 42-36.

GB U20s are next in action on Tuesday against the Netherlands at 2:30pm UK time with the tournament taking a rest day tomorrow (Monday).