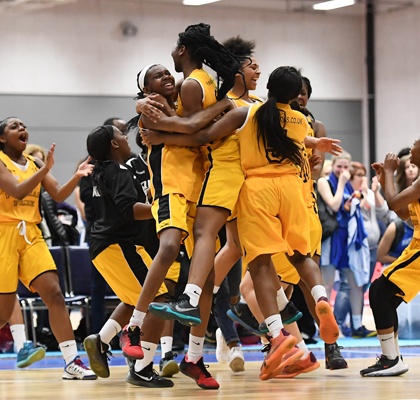 The 2016 edition of the Junior Final Fours took place this weekend at the new National Basketball Performance Centre in Manchester, with a number of exciting games and close finishes.

Peckham Pride, Southend Swifts and Surrey Goldhawks all won national titles in games that had the Manchester crowd on the edges of their seat throughout.

Read on to find out what happened in the U18, U16 and U14 Premier Women’s competitions:

Peckham Pride claimed the 2016 Under-18 Women’s National title after a hard fought 48-46 OT victory over Sevenoaks Suns on Sunday at the NBPC in Manchester.

Chandera Jones-Aryeh picked up MVP for her 12 point, 10 rebound double double, including some crucial plays down the stretch. Jones-Aryeh hit the game tying basket with 55 seconds left to force overtime, before scoring three points in OT and grabbing two huge offensive rebounds in the dying seconds.

Ibilola Oyedji joined her in double figures with 10 points, while Scott and Ekpiteta added 7 each.

“First off I’d like to take my hat off to Sevenoaks, they are a first class organisation & we have so much respect for them,” said Peckham Head Coach Jackson Gibbons.

“The journey our girls have been on and resilience they showed all season, especially this weekend, is a testament to them buying in to the core life principles we have been instilling in them for two years. They are an awesome group of girls who truly deserve this, I’m unbelievably proud of them. Hopefully this can be a platform for our programme to grow.”

“This weekend has been a great display of all of our hard work, commitment and sacrifice that we have put in to our team,” added Chandera Jones-Aryeh. “It’s a great finale to a special season.”

Gabby Nikitinaite led Sevenoaks with 17 points and 10 rebounds, while Durgerian had 13 points and Lozzi hauled in 18 rebounds.

Semi Final 1
In a meeting of two heavyweight institutions in the women’s game, Sevenoaks were able to come out victorious against a plucky Sheffield Hatters side. Gabriella Nikitinaite was an impressive force for the Suns, finishing with 20 points and 5 assists. Haylee Miller also had 19 for the Kent based side. Jo Lowry top scored for Sheffield with 18.

Semi Final 2
Belle Vue was also treated to another cracker in the 2nd semi final as Peckham Pride outscored Southend Swifts 23-15 in the final quarter to grab a 76-71 victory. Emerald Ekpiteta enjoyed a double-double with 17 points and 15 boards. The standout for Southend was Megan Jones who tallied 15 points, 10 rebounds and went 3-6 from beyond the arc.

Southend Swifts pulled out a 58-56 win over Manchester Mystics to claim the Under-16 National title on Sunday in Manchester.

Ellmore finished with 18 points and 12 rebounds for Southend, Simpson added 15 rebounds with her 4 points, while Bennett had 14 points and 10 rebounds.

For Manchester, Lee had 12 points and an incredible 28 rebounds.

Semi Final 1
Manchester Mystics impressed the home town crowd with a 65-53 win over cross-Pennine rivals Sheffield Hatters. The Mystics leapt out to a 23-7 lead by the end of the first and never looked back. Their cause was aided by the dominant performance of Fiona Connelly who led all scorers with 27.

Semi Final 2
Tomorrow’s final is completed by Southend after their commanding 76-43 victory over Surrey Goldhawks. The Swifts took the first quarter 27-12 and the third 18-2 to seal the deal. Charlotte Ellmore was on hand to fill the stat sheet, collecting an impressive 31 points and 14 rebounds.

Surrey Goldhawks claimed the 2016 Under-14 National Championship with a 59-58 win over Southend Swifts in the final.

It was MVP Monique Sahnan who was most impressive on her way to a 28 point, 15 rebound and 10 steal triple double in a game that had multiple lead changes in the final two minutes.

Southend had a 13 point lead half way through the second, which Surrey got down to 4 points with a converted and one layup at the halftime buzzer.

Goldhawks rode the momentum to take an 11 point lead into the fourth, but Southend fought back leading to a dramatic finish. It was baskets from Goldhawks’ Cherrie Parker and Monique Sahnan that secured the win.

Our U14's Girls have done it and pick up our first ever NATIONAL CHAMPIONSHIP! pic.twitter.com/KdowfRlwqQ

Semi Final 1
With a rearranged quarter final game getting the day under way at the Amaechi Centre, Surrey Goldhawks progressed with a 51-42 win over Sheffield Hatters. The Hatters fell behind early but shrunk the deficit to single digits as the 1st half wound down. The game was tied early in the 4th as Sheffield began to grab momentum, but it was the Goldhawks who executed more successfully down the stretch to win by 9.

That cemented our semi final line up for the day which kicked off with female basketball powerhouse GCA Haringey Angels suffering a rare defeat, losing to a sound looking Southend Swifts team 52-46. The Essex side will be hoping to carry that momentum into tomorrow final, which tips at 12:15pm.

Semi Final 2
The second semi final was the lone 6:00pm tip of the day and with all eyes on this fixture, it did not disappoint. With the score tied too many time to count and lead changes well into the double digits, Surrey Goldhawks completed a stunning day with their second victory, downing Tameside Royals 61-58. With each basket greeted by a roar from passionate supporters, it was a great advert for the game as the two sides traded blows. Ultimately one side had to lose and it is Surrey that will continue their march to a title, hoping tired legs won’t slow them down.