Kavell Bigby-Williams Named NJCAA Division I Player of the Year 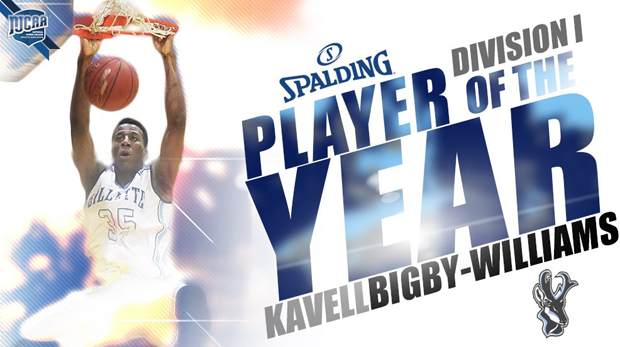 On the same day he officially signed with the Oregon Ducks, Kavell Bigby-Williams was named the NJCAA Division 1 Men’s Basketball Player of the Year.

With the official press release calling him “among the most dominant post players in the history of two-year college basketball”, it is the icing on the cake for an incredible season for the former GB U20.

It also means for the second straight season, Oregon head coach Dana Altman has landed the junior college national player of the year.

“We’re certainly looking forward to what Kavell will be able to add to our team,” said Altman. “He is a very skilled, very dynamic big man and I think our fans will be really excited to watch what he can do.”

Averaging a double-double for the season, Bigby-Williams led the Gillette Pronghorns to a 35-2 record and a third-place finish at the NJCAA DI Men’s Basketball Championship. The forward finished the year with a 59.2 field goal percentage, leading the team with 16.8 points per game. Ranking second in the nation with 13.6 rebounds per game, Bigby-Williams posted double-figures in rebounds in all but two games and finished with 20 or more four times. The London, England, native was the only player in all three NJCAA divisions to average over 10 defensive rebounds per game, averaging 10.2 for the year. Bigby-Williams’ scoring and rebounding efforts produced 28 double-doubles during his sophomore campaign.

Despite his exceptional ability to put the ball in the hoop and haul in rebounds, perhaps the greatest attribute for Bigby-Williams is his defensive presence in the paint. Recording double-figures in blocks five times in 2015-16, Bigby-Williams led the NJCAA with 5.9 blocks per game. His labor in all aspects of the game resulted in five triple-double performances on the year.

At the NJCAA DI Men’s Basketball Championship, Bigby-Williams continued his run of dominance and proved to be one of the top players on the court. Gillette’s all-tournament selection averaged 14.3 points, 12.3 rebounds and 5.8 blocks in four games. Bigby-Williams posted double-double performances in the Pronghorns’ 87-83 quarterfinal upset of top-seeded Trinity Valley (Texas) and the 74-72 win over Ranger (Texas) in the third-place game.

Check him out in action last summer: