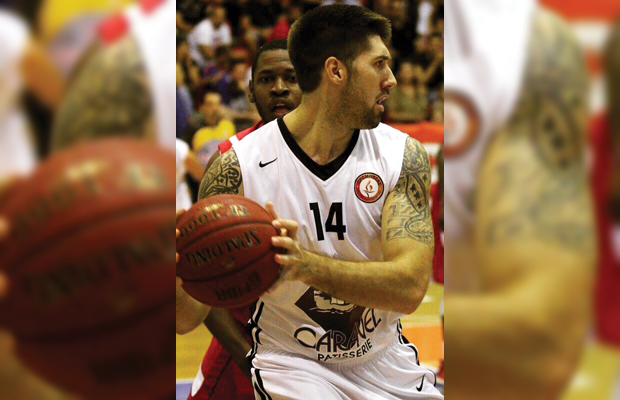 Fahro Alihodzic has already come a long way since playing at University of Alabama Birmingham in college, and has his sights set on becoming a regular amongst the GB Senior set-up.

The 26-year-old was awarded his first taste of senior international experience in last summer’s friendlies against the Netherlands and Portugal on the back of his rookie season as a pro.

And, Alihodzic is determined to not let it be a one-off as he aims to become a household name in GB colours.

“I really enjoyed being part of the GB programme in the summer,” he reflected.

“Receiving my first two caps for the country in Holland was great and I hope for many more.

“The experience was another stepping stone in my career and it was truly prideful to be part of the GB set-up.

“I will continue to do what I do everyday – work extremely hard to become the best player I can be.

He added: “Coach (Joe) Prunty can see my potential and it is my job to achieve and prove myself.

“Being a regular in the GB programme in the future is a goal I continue to chase and will be looking forward to the next opportunity when the time comes.”

GB were drawn alongside Hungary, Macedonia and Luxembourg in January’s FIBA 2017 EuroBasket Qualifying Draw, and Alihodzic hopes to be able to play a role in an important campaign for his adopted nation.

“After GB failed to make the last Eurobasket, the programme is really hungry to make it to the 2017 Final Round, and I will try my best to be a part of trying to help make that happen.”

Alihodzic was born in Vlasenica – a small town in Bosnia – but moved to the UK with his family at the age of two as a refugee, proceeding to grow up in Leicester.

As an active participant in many sports in school, Alihodzic found his love with basketball, joining local league side Leicester Cannons and would go on to represent England at the Under-18’s FIBA European Championships, in 2007.

Shortly after, he ventured stateside for a year at St. Francis DeSales High School, before joining D1 school Fordham in 2009 following a year with the Canarias Basketball Academy in Spain.

Things didn’t entirely work out at Fordham, and Alihodzic ended up sitting out the 2010-11 season as a redshirt, before impressing at JUCO Southeastern (Iowa) Community College, which led to a return to D1 with UAB for his final two years of eligibility.

Alihodzic turned pro in the summer of 2014, but his first year out of college was somewhat of a turbulent one, taking him all over the globe with four different clubs.

Having spent pre-season with Liga Endesa side Manresa, he was later released after a short spell in Hungary, and went on to enjoy an extended stay with AGOR in Greece’s A1 league, before finishing the season in Argentina.

However, despite the instability, Alihodzic believes his first season was one of learning rather than one of frustration, and recalls being thrown into the deep end shortly after earning a shot in one of the top leagues in Europe

“After the pre-season training camps, I found a great opportunity in Greece to showcase myself on the island of Crete,” he explained.

“I signed a contract to replace an injured player who was out for 3-4 months, and after a few days I had to be ready to compete against Euroleague giants Panithanikos in the Athens Olympic Arena, followed by Olympiacos as my first two games in Greece.

“It was definitely a great experience for me.”

Another particular match-up stands out for the UAB graduate with his spell in Greece also pitting him up against recently retired GB legend Pops Mensah-Bonsu, then at AEK Athens.

The 2012 Olympian showed out on that occasion, producing a big double-double on his debut, but Alihodzic more than held his own with a solid game of his own – recording 16 points and eight rebounds.

Eight months on, and Alihodzic would make his return to Greece for the start of his second season representing Brits overseas on the back of a confidence boosting spell in Argentina as well as picking up his first two GB Senior caps.

The 6’10” center is currently averaging 11.1 points per game along with 6.6 rebounds as a regular starter, helping Promitheas Patras to their current position in the top four of Greece’s A2 league.

“Promitheas Patras has been a great situation for me this season,” Alihodzic declared.

“They offered me a great chance in my second professional season to be a starter and further prove my game in a good league and to build my resume.

“I need to make sure I continue this successful season and move up from here.”

The improvement since arriving at Birmingham, Alabama for the final two years of his college career at UAB has been vast, and Alihodzic isn’t done yet with his development.

“After a year and a half of top-level basketball, I feel like I am developing everyday in practice.

“Physically my body has changed a lot [since college] and I’ve learned a lot about the game playing in many different places with many good players.

“It has not been an easy road to where I am, but adversity is what makes you stronger.

“I’ve continued to push very hard and the harder I’ve pushed, the luckier I’ve got with the next opportunity.”