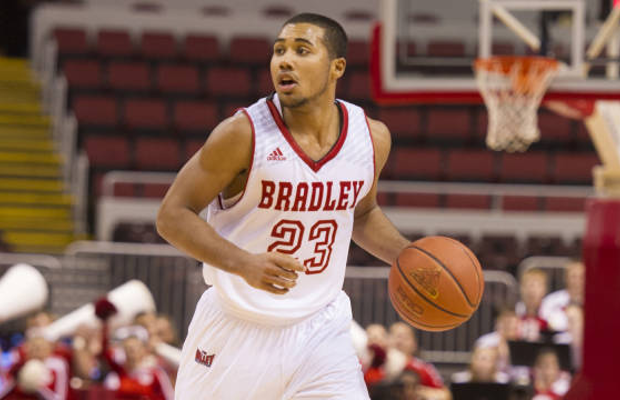 Dwayne Lautier-Ogunleye has been named to the Missouri Valley Conference (MVC) All-Freshman Team after impressing in his first season at Bradley University.

The former Bristol Flyers and GB U20 guard has adapted to a role off the bench in recent weeks, still finding ways to be productive as the Braves’ leading scorer this season.

Lautier-Ogunleye has started in 23 of 31 games this season and averaged 9.7 points per game along with 4.1 rebounds and 3.0 assists, logging over 1,000 minutes for his team.

The ’96 born guard made an instant impression with the MVC Newcomer of the Week award picked up in November, and netted a season-high 20 points in a loss against Missouri State at the beginning of February.

DLO was joined in the MVC All-Freshman Team by his team-mate, Dutch forward Luuk van Bree having been voted in by head coaches and media across the league.

Bradley finished the regular season with a 5-26 record, including 3-15 in conference play, and they will be the No.9 seeds in the MVC Championship starting next week.