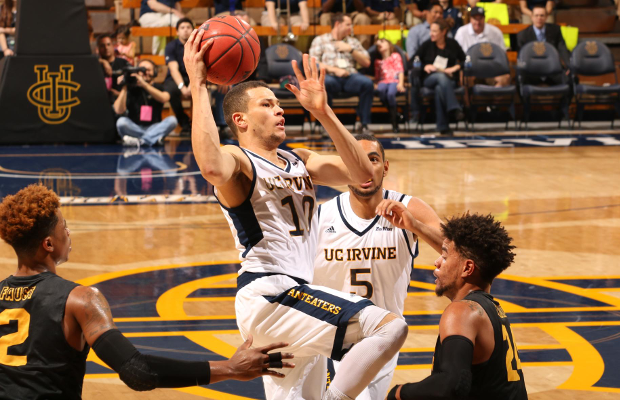 We take a look at how Brits are getting on in NCAA Division 1 in the latest week of action as the college basketball regular season begins to draw to a close.

Luke Nelson came up big for UC Irvine this past week after netting 25 points on 9-of-10 shooting from the field, including a clinical 6-7 from 3-point range in a 90-67 home win over Long Beach State. The junior guard also dished out four assists in the win to help the Anteaters improve to a 21-8 record this season, and 10-3 in the Big West.

The former GB U20 also put up 18 points in an earlier 75-71 defeat having also provided seven assists and claimed four steals – tying his career-high – as UCI conceded the final nine points of the game to fall to their third loss in Conference play.

Elsewhere, Alex Young scored 11 points and tied his career-high with nine assists in the aforementioned win for UC Irvine, whilst going for seven points and six assists in their four-point defeat last weekend.

Ryan Martin posted two more double-doubles this past week after recording 16 points and 10 rebounds in a 95-86 defeat, before putting up 12 & 14 as Tennessee Tech suffered their first home loss of the season (13-1 record) and are now 18-10 overall this season, and 10-5 in the Ohio Valley Conference (OVC).

Freshman Dwayne Lautier-Ogunleye helped Bradley Braves celebrate its 1000th Missouri Valley Conference game in school history with 16 points and five assists in a 73-70 win over Drake. DLO also finished with 11 points, eight rebounds and seven assists in a 55-67 defeat as his side drop to 5-25 on the season, and 3-14 in MVC play.

Jesse Chuku recorded 10 points and eight rebounds in a 73-61 win last Saturday, before scoring five points in a 71-54 success as Lehigh moved to .500 for the first time this season, and 12-5 in the Patriot League on the back of eight straight wins. Elsewhere, Jack Crook scored 12 points, and Aaron Menzies added four points and five boards as Seattle were beaten 70-57 on the road to fall to a 6-6 record in the WAC, and 12-14 on the season.

Senior guard Teddy Okereafor had an all-round stat-line after finishing with eight points, seven rebounds, five assists as well as three steals in a 71-58 road defeat for Rider, having also had four points, four boards and three assists in a previous 64-84 home loss with his side dropping to 7-11 in the MAAC.

Also, Prince Ibeh started two games for Texas this past week, scoring four points and collecting four rebounds in a 78-64 loss against Baylor, before scoring three points in nine minutes in a 71-70 road win as Texas improved to 18-10 on the season and 9-6 in the Big 12.

After helping Augustana claim the NSIC Championship, Jordan Spencer finished with seven assists and six rebounds as the Vikings opened the post-season Conference Tournament with a 91-57 victory.

Also, Tamas Okros picked up the Central Atlantic Collegiate Conference (CACC) Rookie of the Week award for the fifth time this season, helping Post University clinch the No.2 seed in the North Division of the post-season Conference Tournament.

Meanwhile, Kavell Bigby-Williams continues to put up insane numbers in JUCO, earning the Player of the Week with incredible back-to-back performances. The former GB U20 went 12-of-13 from the field in 26 points; adding 16 rebounds and four blocks in a 131-85 victory, before recording a triple-double with 22 points, 16 boards and 12 blocks in a following 85-73 success.