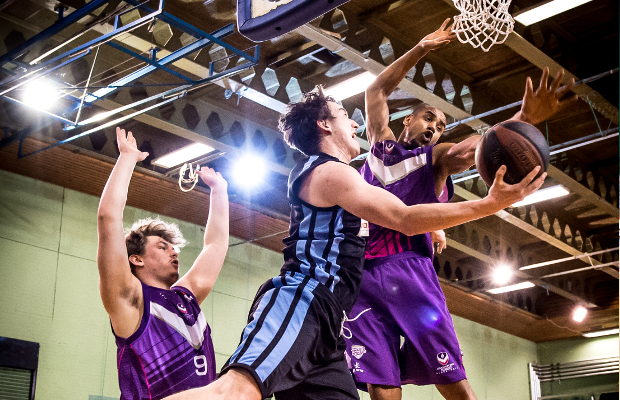 Manchester Magic (22-2) secured the D1 league title with a 70-42 victory over Bradford Dragons (6-19) to continue their long unbeaten run in all competitions. Simon Anumba top scored with 16 points with Magic’s title-winning celebrations able to start earlier than anticipated given Lancashire Spinners’ decision to forfeit their unscheduled fixture.

However, their winning streak was ended the next day as Derby Trailblazers (19-6) gave themselves an early psychological boost ahead of the playoffs with a 72-68 victory as five players reached double figures. The Trailblazers went into the game on the back of a 93-90 loss at Worthing Thunder (9-16) with Tom Ward netting the game-winning three to finish with 19 points and six assists, while James Cambronne put up 27 points. Derby were led by Chris Taylor’s 29 points with David Watts absent for the weekend.

In midweek, Reading Rockets (17-7) saw their nine game unbeaten run in the league come to an end as Essex Leopards (16-9) overturned a five-point deficit late in the fourth to snatch a 74-76 win on the road. The Rockets then suffered another agonising home defeat on Saturday as Hemel Storm (17-8) came away from Rivermead Leisure Complex with a 75-76 triumph with Nik Rhodes scoring 17 points.

Hemel were unable to make it back-to-back away victories on Sunday as they went down 88-79 at London Lituanica (16-9) despite Simon Kearney’s 26 points. Ausridas Petraitis returned to form with 22 points and 11 rebounds to go with a 24-point haul he recorded in his side’s 80-62 victory over Team Northumbria (15-9) the previous day.

Essex followed up their win in Reading with a double-winning weekend as they began with a hard-fought 79-81 success away at Westminster Warriors (5-20) with three players top scoring with 13 points. Westminster bounced back from the loss to upset Northumbria 77-68 with Jon J Johnson putting up 31 points in the win in a strong 40-minute effort.

Meanwhile, the Leopards then claimed an 86-78 victory at home to Tees Valley Mohawks (3-20) behind 17 points from Ladi Brown. The visitors were led by J Hendricks’ 30 points, while Rob Donaldson and Alex Moore scored 24 and 21 points respectively as the trio combined for all but three of their side’s points.

Also, Lancashire Spinners (15-10) recorded a 69-56 victory over Kent Crusaders (2-22) with Kyle Carey and George Darling netting 13 points apiece before beating Leicester Warriors (10-15) 76-82 on the road with Mike Bernard leading the way with 15 points. Leicester had enjoyed a 54-98 rout away at Tees Valley, the previous day, with Theo Rothstein top scoring with 23 points.

The regular season concludes this coming weekend when the quarter-finals of the playoffs will be set.

Solent Kestrels (18-4) wrapped up the league title after defeating Loughborough Student Riders (16-4) 72-57 to bring an end to an exciting title race. Elliott Dadds top scored with 22 points, while Louie Kirkman added 17 points. Despite missing out on the title, Loughborough bounced back the next day and clinched promotion with a 54-60 victory away at Brixton Topcats (6-15) with minutes evenly distributed with every player on the scoresheet as the visitors held off a fourth quarter comeback.

At the other end of the table, London Westside (5-17) pulled off a valiant survival attempt after recording four wins in week including back-to-back on the road this past weekend. They defeated East London All Stars (12-9) 43-52 on Saturday, before using a 24-7 final quarter to defeat Derbyshire Arrows (11-11) 58-69 the following day. The Arrows had also been beaten 56-83 by London Greenhouse Pioneers (16-6) as they rounded off their regular season with successive losses at home.

Elsewhere, Ipswich (13-9) earned a 57-71 win on the road against Nottingham Hoods (15-7) with the home side led by Urbistondo’s 24 points. Caleb Fuller led a balanced Ipswich attack with 14 points with Edson Ferreira contributing seven points, 14 rebounds and seven assists. Liverpool (12-9) eased to an 85-49 victory over Brixton with Chris Bigley top scoring with 23 points, while Worcester Wolves II (3-18) defeated Eastside Eagles (2-20) 95-78.

Team Newcastle University (19-1) saw their long unbeaten run of 39 league wins in a row come to an end at the weekend as their depleted side went down 40-55 at home to Team Birmingham (12-8) in D3 North with Charlie Wallrapp scoring over half of their points with 21. City of Sheffield Saints (8-11) recorded a 67-79 win away at Myerscough College (7-13), while Doncaster Danum Eagles (16-4) defeated Leeds Force Academy (2-17) 69-81 on the road, and Sefton Stars (12-8) finished their regular season campaign with a 71-67 success against Derby Trailblazers II.

Seven of the eight home sides in the opening round of the NBDL Playoffs advanced with 15th seeds Kent Crusaders II pulling off the biggest upset with a 61-91 win away at Greenwich Titans (2). England U18 junior Dan Akin top scored with 23 points having produced another of top displays in the ABL this season.

Top seeds Gateshead Phoenix (1) overturned a seven-point half-time deficit on their way to a 65-54 victory over Sporting Club Albion (16) with Will Spragg leading the way with 21 points. Also, University of Chester (3) edged out City of Birmingham (14) with Niel Gillard and Phil Brandreth combining for 43 points. Martyn Gayle top scored with 20 points for the visitors, who were undone by an 18-10 final quarter from Chester.

Sussex Bears (4) were handed a free pass into the next round as Sheffield Sabres (13) forfeited their clash due to injuries. Meanwhile, Cardiff Met Archers (5) recorded an 87-68 win at home to Blackburn College Spinners (12) as they powered clear in the final quarter. Annureet Bajwa had a game-high 23 points for the Archers.

Elsewhere, Southwark Pride (6) claimed an 89-77 win over Kings Lynn Fury with Shaquille Walters netting 23 points for the home side as they raced into an early 26-17 lead and never looked back. Preston’s College Titans (7) eased past Coventry Tornadoes (10) 89-69 and Sheffield Hallam Sharks defeated Thames Valley Cavaliers with Eddy Brownell’s 26 points supported by his brother George’s additional 20.

The last eight ties will take place on the weekend of 2-3 April with playoff quarter-finals also taking place in Division 1, Division 2 & Division 3 that weekend.