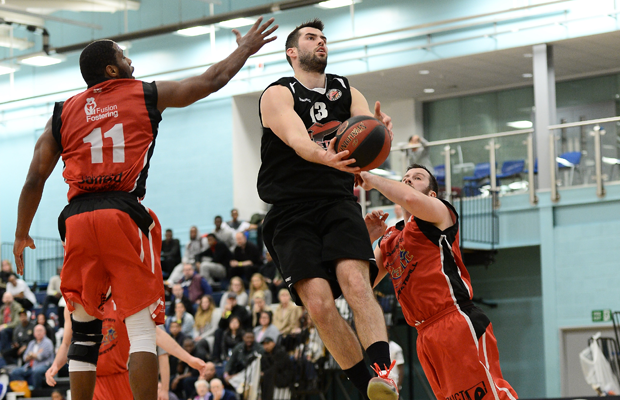 The regular season in the NBL has officially come to an end with the final weekend in D1 taking place as the 2015-16 campaign now moves on to next week’s with the playoffs quarter-finals across all four divisions.

Reading Rockets (19-7) secured third place in D1 after closing the regular season with victories over the top two teams. Manuel Pena Garces’ side defeated Derby Trailblazers (19-7) 85-76 on Saturday after overturning a seven-point deficit at the half behind a 30-point display from D’Montre Edwards, before beating the champions, Manchester Magic (23-3), 83-89 on the road after coming from behind once again.

Meanwhile, Team Northumbria (16-10) finished with an 83-76 win at home to London Lituanica (16-10) with Chuck Duru top scoring with 16 points as six players hit double figures. The visitors ran with a five-man rotation with Northumbria pulling away with a 28-8 third period, before being handed a 20-0 win against Leicester Warriors (10-16) the next day. Marc Steutel’s side face a trip to Hemel Storm (18-8) in the post-season with Hemel rounding out their campaign with an 86-80 victory against Bradford Dragons (6-20) with Tom Adorian netting 33 points.

Prior to their defeat against Reading, Manchester had crushed Kent Crusaders (3-23) 99-47 with Jack Minister top scoring with 19 points and dishing out nine assists. However, the Crusaders bowed out of D1 in style after easing to a 47-82 win on the road at Tees Valley Mohawks (4-22) with Jack Burnell top scoring with 15 points.

D2 runners-up Loughborough Student Riders (17-4) finished their regular season with a 74-86 victory over Liverpool (12-10) in a dress rehearsal of their upcoming encounter in the playoffs. Meanwhile, Arif Sempala netted 33 points to lead East London All Stars (13-9) to a 77-85 win on the road against Worcester Wolves II (3-19), who face relegation.

All of the quarter-finals in the NBL Playoffs take place this weekend (2/3 April).