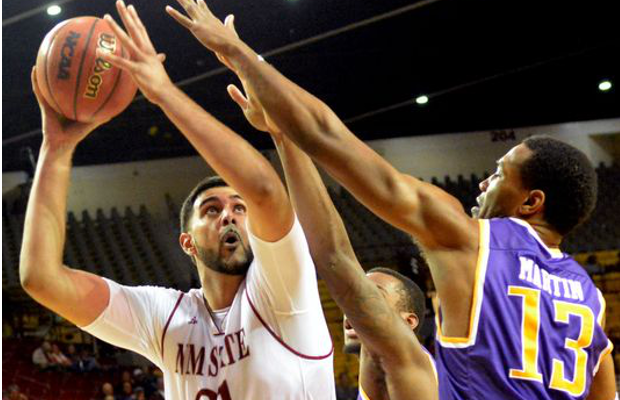 Ryan Martin had another really strong week for the Golden Eagles after leading his side to two more Ohio Valley Conference (OVC) victories.

The senior forward picked up the OVC Newcomer of the Week award once again after scoring 26 points on 8-of-13 shooting including 9-of-10 from the line and adding seven rebounds in an 86-63 win at home to Southern Illinois University Edwardsville.

Martin then followed that performance with his fourth career double-double with 18 points and 11 rebounds that contained a flawless display from the line, making all nine free throw attempts.

Teddy Okereafor scored a career-high 30 points in a losing effort with Rider suffering 64-60 loss. The senior guard then had five points and six assists in a following 67-58 defeat at Iona as his side drop to 0-4 in the Metro Atlantic Athletic Conference.

Alex Young contributed 17 points, five assists and four steals to a 54-52 win for UC Irvine this past week before finishing with 10 points, six rebounds and four assists in a 76-55 opening Big West Conference triumph. Luke Nelson had a 5-5-5 stat-line in the first success, and then netted 16 points including 4-of-5 from beyond the arc in the second home win.

Jesse Chuku was a point shy of a double-double after recording nine points and 11 rebounds in an agonising 51-50 loss for Lehigh as they dropped to 3-11. The senior forward had also posted seven points and seven boards in a previous 81-73 victory earlier in the week.

Freshman Josh Steel made the most of an opportunity to play extended minutes after registering seven points, five rebounds and three assists in 37 minutes, although Duquesne suffered a 58-66 loss against Dayton to fall to 10-4 on the season.

Prince Ibeh pulled down 10 rebounds in an 82-74 loss for Texas, before putting up seven points and nine rebounds in another defeat against Kansas State. Teslim Idris scored 10 points in 38 minutes of Savannah State’s 61-58 loss as he was unable to lead his side to victory in the closing stages.

Elsewhere, Jack Crook and Aaron Menzies both netted eight points apiece as Seattle fell to an 84-69 defeat, while Ben Lawson went 4-of-5 from the floor in a nine-point showing for Western Kentucky as they were beaten 94-76.

Grant Fiorentinos had five points and five rebounds in the aforementioned loss for SIUE against Tennesse Tech, and Dwayne Lautier-Ogunleye had nine points with Bradley dropping to 2-13 for the season following a 58-85 defeat.