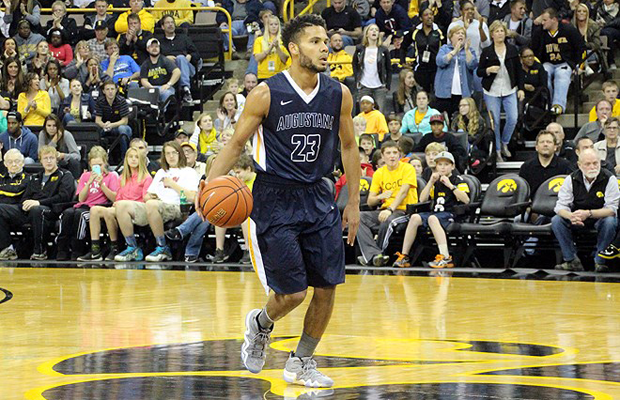 Spencer’s teammate Daniel Jansen hit a jumper as time expired to lift the No. 1 rated NCAA Division II team in the country Augustana to a 76-74 exhibition win over the University of Iowa in front of 12,874 fans at Carver-Hawkeye Arena in Cedar Rapids, Iowa.

Wow! Augustana stuns Iowa in an exhibition hoops game on a buzzer-beater! https://t.co/E29MCBmfAA

1994 born Jordan Spencer had six points, five rebounds, five assists and a block in 37 minutes of action and tweeted “What a time to be alive!” after the game. Augustana led by as many as 15 in the second half before the Hawkeyes stormed back into it and tied it up with 28 seconds remaining to set up the final moments.

Spencer, originally out of Milton Keynes but most recently playing for London Lions in the UK, was the Northern Sun Intercollegiate Conference Freshman of the Year last season, averaging 12.3 points, 4.3 rebounds, 6.4 assists in 20 conference games for the Vikings, which also earned him a spot on the NCIS All-Second Team.

“There’s two ways to look at this game. You can schedule it or not, okay?” Iowa Head Coach Fran McCaffery said after the game.

They were also ranked No. 1 in the National Association of Basketball Coaches’ Preseason Poll. The Vikings spent 15 straight weeks ranked in the top-25 last season, where they had a school record 31 wins.