Around the NBL - Week 8 - Hoopsfix.com 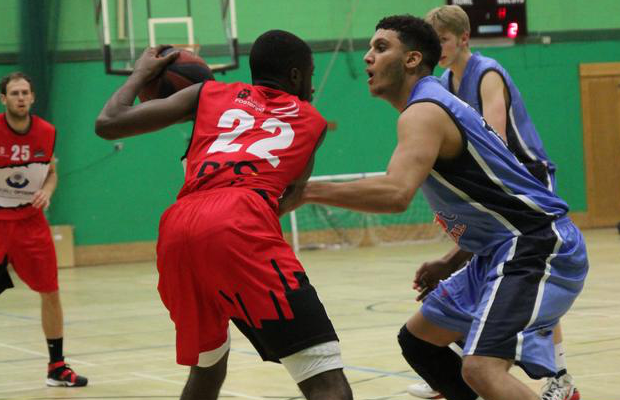 Check out our latest recap as we take a look at all of the action from around the NBL from D1 all the way down to the NBDL.

Reading Rockets (3-0) continued their unbeaten start to the season with an 11th straight win in all competitions as they defeated Leicester Warriors (0-2) 58-80 away from home. D’Montre Edwards top scored for the Rockets with 23 points as captain Danny Carter made a welcome return for his side. London Lituanica (3-0) joined the Rockets at the top with their third win with an 89-73 victory over Tees Valley Mohawks (0-2) behind a 19-point haul from Ausridas Petraitis.

Lancashire Spinners (2-2) claimed their first league win with an 80-90 success at Westminster Warriors (0-2). Player-coach Julius Joseph had 17 points in 17 minutes for the Warriors as they went up by four in the final quarter, before the visitors went on a 13-0 run. Alex Roberts netted his fifth triple to seal the win and he finished with a game-high of 21 points.

Neal Hopkins’ side then made it a double-winning weekend on the road the following day as they eased their way to a 60-115 victory over Kent Crusaders (0-3). Kyle Carey was another young star to shine for the Spinners as he dropped an impressive 35 points in the win as his side scored 33 in the opening quarter and never looked back. Hemel Storm (1-1) also claimed a win away at Kent Crusaders as they earned a 49-69 win on Saturday, led by 16 points from Tom Adorian to help pick up their first league victory.

Worthing Thunder (1-2) started their weekend double-header with a 62-66 victory at Tees Valley Mohawks as James Cambronne posted a double-double of 17 points and 15 rebounds as well as adding five assists on debut.  Tom Ward was one dime shy of a triple-double after recording 11 points, 11 rebounds and nine assists with his side closing on a 5-0 run to take their first league win.

However, they followed that success with a 90-74 defeat away at Team Northumbria (2-0) as Marc Steutel’s side maintained their unbeaten start in the league. Lewis Champion led the way with a game-high of 22 points as the home side raced into a 29-9 advantage after the first quarter. Ward had 21 for the visitors.

Derby Trailblazers (2-0) also improved to two wins from two as they avenged their recent National Trophy defeat to Bradford Dragons with a convincing 82-60 victory. Sydney Donaldson top scored with 17 points in the win, while Nick Moore had 19 for the Dragons, who were missing a couple of players including Henri Bongoma.

Manchester Magic (2-0) are also one of five unbeaten teams in the league after they saw off the challenge of defending champions Essex Leopards (1-1) with a 70-76 triumph. Jack Minister had a team-high of 16 points, while Ryan Lohfink and Simon Anumba added 15 points apiece. The Leopards put up 32 points in the second quarter to lead at half-time, but were held to just 25 in the second half as they suffered their first league loss.

There was one game that took place on Sunday as Reading lost their perfect record this season with a 65-86 defeat at home to Hemel Storm – with one final game left in the South Group. Bode Adeulola and Nick Rhodes led Storm with 21 points apeice as they finish with a 4-2 record. Dave Ajumobi also had 21 for the home side, who now play Worthing Thunder next week to determine who plays who in the quarter-finals.

Nottingham Hoods (3-0) have the outright lead in D2 with only three unbeaten sides now remaining as they defeated Liverpool (0-2) 80-71 – thanks in large to a 31-18 second period. Miguel Lorenzo Leis and Lucasz Siczek top scored with 16 points apiece, while Jack Hudson had 20 in vain for the visitors. East London All Stars (2-0) are the other team yet to be beaten after scoring 30 points in the final quarter to beat London Greenhouse Pioneers (1-1) 71-76 on the road.

Previously joint leaders Ipswich (2-2) dropped both games this weekend to fall to sixth in the standings. Nick Drane’s side were beaten 75-58 at Loughborough Student Riders (2-1) on Saturday as Raheem May-Thompson and Lucien Christofis added 19 and 18 points respectively.

Ipswich were then edged out 98-100 by Derbyshire Arrows (2-1) in a high-scoring thriller despite a 34-point haul from Leigh Greenan, who also added 12 rebounds. For the visitors, Alex Burt finished with 26 points and eight assists, while Joseph Baugh added 21 points and 10 boards as three players played the entire 40 minutes. That result for the Arrows was on the back of another road win having claimed a 78-82 victory at Worcester Wolves II (0-3) less than 24 hours earlier with Baugh firing in 27 points.

There was also a victory for Brixton Topcats (2-1) this weekend as they outlasted Eastside Eagles (0-2) in a 72-74 win in overtime with Laurie Lewis scoring 20 points in the loss.

Team Newcastle University (5-0) continued their winning start in the North as they powered their way to an impressive 110-62 win over Myerscough College (3-2). Tayo Oyefusi had a game-high 27 points for the hosts, while Charlie Wallrapp added 25. Doncaster Danum Eagles (4-0) are also still unbeaten as they put on a treat away at Mansfield Giants (2-3) in a 102-124 victory as the two teams combined for 226 points. Matthew Martin had 29 points to lead the visitors with Josh Metcalf providing valuable support with a further 24 points.

On Sunday, Birmingham Mets (3-2) claimed an 87-94 overtime victory over Newcastle Under Lyme College Knights despite a combined 52 points from Kieran Jones, who had 30, and Omar Khanani – originally signed for BBL side Manchester Giants in pre-season. Derby Trailblazers II (2-2) evened up their league record with a 74-64 win at home to Sefton Stars (2-3) as they racked up 33 points in the final period.

In the South, Thames Valley Cavaliers (5-0) are clear at the top after they maintained their unbeaten start on Friday night as Martelle McLemore netted 29 points in a convincing 113-80 victory at home to London United (1-1). Brunel Ducks (4-1) kept up the pressure with an 81-90 victory away at Oxford Brookes University (2-3) despite a 27-point haul from Abdoulaye Sylla as Benji Lawmann and Joel Henry both scored 17 points in the win.

Despite the loss in the league, Middlesex became the first team to reach the quarter-finals of the National Shield after beating Sussex Bears 80-70 in the Third Round. The rest of the last 16 games take place next Sunday with one game also being played on November 15.

In the North-East, Gateshead Phoenix (3-0) lead the way as they maintained their winning start with a 43-56 win at Derby Trailblazers III (1-2) on Sunday. Nottingham Hoods II (2-0) are also still unbeaten after 27 points from Truzzell Spencer led them to a 70-56 win against Sheffield Sabres (0-2). Sheffield Hallam Sharks (1-1) picked up their first win as they eased to a 96-50 win at home to Kingston Panthers (0-1).

In the South, Kent Crusaders II (3-1) were rampant in a 144-39 victory at home to London United II (0-3) as Dan Akin top scored with 26 points with the home side scoring 40 in the final period to really hammer home their advantage as it broke the century mark. Sussex Bears (3-0) still lead the way, though, and they maintained their unbeaten record with a 75-58 victory over Southampton University (2-1) behind 37 points from Bud Johnston. Also, Folkestone Saints (2-1) were awarded a 20-0 forfeit win against Reading Rockets II (0-3).

Essex Blades (3-1) kept up the pressure on South-East leaders Dagenham Dragons as they recorded a 96-85 win at home to Northants Taurus (0-4). West Herts Warriors (2-2) edged out Cambridge Cats (1-3) 66-60 in a low-scoring encounter, while London Thunder-Lewisham (2-2) defeated Anglia Ruskin University (0-4) 88-98 on the road behind 28 points from Josh Edwards. Southwark Pride (3-1) ended the unbeaten start of Greenwich Titans (3-1) with a 78-86 success away from home as Gedi Juozapaitis and Amin Adamu combined for 51 points in the win.

Check back each week for all of the latest action around the NBL!