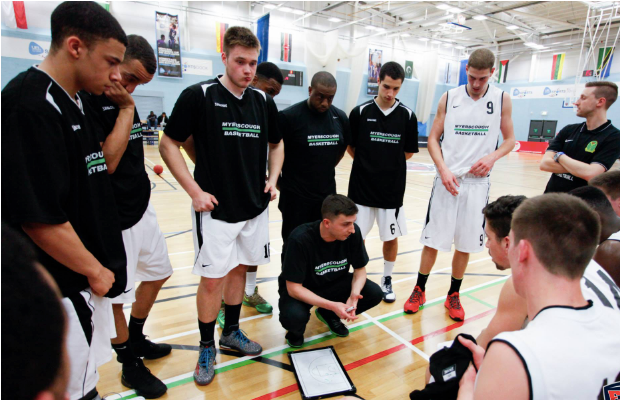 Neal Hopkins spent the summer with the England Under-18’s in Austria as a performance analyst and is now preparing for his new role as Head Coach of Lancashire Spinners ahead of the upcoming NBL season in Division 1.

After a number of seasons as an assistant coach in the BBL, Hopkins – regarded as one of the leading young coaches in the nation – will pit himself against the best of D1 as the Spinners compete in the top-division for the first time.

And Hopkins is excited about being given the opportunity with the Spinners and is looking forward to the challenge that awaits.

“First of all, big, big thanks to Ken Masser (Club General Manager) and the board for giving me this great opportunity,” he said. “The Spinners are an exciting programme, building the right way and in the right direction.

“The level of talent coming into the league this year is outstanding. I’m looking forward to testing my wits against the other D1 coaches.

“I’ve been on the peripheral of a higher level and now I have the chance to make that move up. I’ve learnt from great coaches; the two years at Mersey (Tigers) with Tony Garbelotto helped shape a lot of my coaching philosophy and I also picked up a lot from Jeff (Jones) in the last three years.

“There will be a lot of crossover from my previous roles as I did a lot of the scouting and prep with elite athletes and I’ll be able to take that into Division 1.”

Last season, Lancashire earned promotion from Division 2 whilst also winning the Patrons Cup with a crushing win over league champions, London Lituanica. With Hopkins’ appointment at the helm comes an unformal partnership with Myerscough College; providing the platform for the youngsters to play at the highest level.

“The Spinners were a great scoring team in Division 2 and I don’t want to take away from that. We have multiple threats and I want the players to be able to express themselves

“My belief within the group is to give direction and structure on defence. By making the players accountable on defence in order to reward our offence.

“I definitely believe we will be competitive – we have a really talented squad with the kids coming through at Myerscough. It’s a massive opportunity for the likes of Alex Roberts who will be able to learn from players like Steven Gayle, who is still hugely talented and could be playing at a higher level. Mike Bernard has come from the BBL with a lot of professional experience which will help make us competitive.

The Spinners will look to blend youth and experience with six under-19 players making up the 12-man squad for the D1 side with the opportunity presented to the academy players to earn their chance in the first team.

“The energy of the youth will combine well with the experience of our senior players which will give us great balance,” said Hopkins. “All of the young players will be given chances to play and grow as individuals.

“I’m really happy with our squad. It’s been great to bring back some of the players that have played a big role in getting Spinners to this point from Division 4 in a short space of time. We got our business done early and the signings of Mike Bernard and Connor Murtagh were really big for us.”

One of the stories of the NBL season in 2014-15 was the success of Kent Crusaders with a predominantly young side taking the top division by storm and causing a suprise to many by claiming victory in the playoffs. Hopkins praised the approach that was taken, giving youth a chance and believes the Spinners are capable of pulling off their own successful policy.

“If you look at the model of Barking Abbey at Kent Crusaders, there are a lot of clubs that would love to emulate that,” he said. “The progression route provided by (Director of Operations and Head Coach) Lloyd Gardner is part of an unbelievable model. I feel it’s needed and will help us as a basketball nation.

“We have a great opportunity with our academy, although there’s no formal partnership, we will be looking to nurture the players and keep giving them the opportunity at D1 level.

“There are a lot of kids coming through at Myerscough and we also have Geroge Darling joining from Doncaster and it’s important to give the young players a chance because these are the backbone of possible GB teams in the future.

Hopkins comes into his new role in pre-season on the back of a summer with England’s U18 Men national side; culminating with the European Championships where five wins during the tournament helped secure a 7th place finish.

“It was a great experience,” he reflected. “I was really proud to be involved and was just happy to help out in any way I could. I took care of the video and scouting and provided as much support as I could.

“I thought the players were great throughout the tournament. We were missing some players but they did the country proud. I loved every minute, being able to sing the national anthem with everyone and I hope to be back at some point.”

One of the 12 players involved was Roberts, who makes the move from Myerscough along with another junior international in Ireland’s Cian Hickey. Both players were part of their side’s four National titles last season including the EABL Championship victory, which Hopkins regards as a ‘great achievement’.

“It was massive for us,” he said. “Not even 18 months old, to win a National Championship within two years was pretty big. We worked really hard and our success was a by-product of what we are doing, trying to develop players.

“Having players go to America illustrates the growth more than winning. It was a great experience which we will carry into this season.”

Hopkins takes charge of his first competitive fixture for the Spinners away at defending champions, Manchester Magic, in the National Trophy this Saturday.