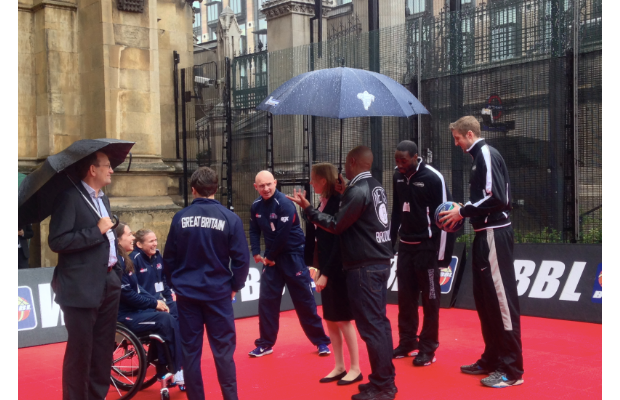 The Basketball All-Party Parliamentary Group (APPG) held their second ‘Shoot Some Hoops’ event on Speaker’s Green at the Houses of Parliament, on Wednesday.

Surrey Scorchers duo Tayo Ogedengbe and Will Neighbour were on hand alongside Leicester Riders’ Barry Lamble to help a number of MP’s in a shooting contest on the constructed mini-court.

GB Women internationals Stef Collins and Erin McGarrachan were also present at the event alongside members of the men’s and women’s GB wheelchair teams that medalled at the recent European Championships in Worcester.

Sports Minister, Tracey Crouch, also took part in the event with her sports consultation running until early October. Sharon Hodgson MP, the chair of the APPG, gave a short speech in front of the gathered group with her passion for basketball in the UK evident.

“It was great to host the second ‘Shoot Some Hoops’ showcase in Parliament after the success of last year and to see so many MPs come out to show their support for basketball,” she said.

“It is important that politicians hear about the important work basketball clubs are doing right across the country to inspire young people to become more active and lead better lives and what they, as policy-makers, can do to help overlooked sports such as basketball.

“That is why I hope the current new sport’s strategy consultation by the Department for Culture, Media and Sport will give the likes of basketball the opportunity to show how they are able to tap into the potential of young people to help them succeed in life.”

And Surrey’s Ogedengbe was impressed with the event that took praise, giving praise to Hodgson for her role.

“It’s amazing having an event like this and I’m glad we have got someone like MP Sharon Hodgson on our side,” he said. “As Chair of the APPG, she is able to be our voice and is easily accessible to help with any issues.

“It’s a good chance to show people what the sport is about and things like this are important to raise the profile of basketball. It’s definitely important to be in the Houses of Parliament and it’s not something you get to do every day, so I feel like I’ve done my part to help.”

Neighbour, who is suiting up alongside Ogedengbe this season, added: “It’s massive to be able to show basketball to people at the top and then seeing them show such an interest in our sport.

“It was a great experience to be at the Houses of Parliament and meeting important people who can potentially help.

“We need to keep developing the interest of the sport and get people watching games, so that the sport can continue to grow in this country. It’s very important to keep raising the profile of basketball.”

The APPG Basketball is a cross-party group of MPs which aims to promote the development of the sport of basketball at all levels in the UK. Their inquiry final report can be read here.