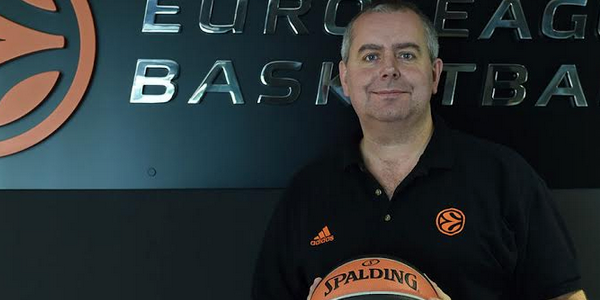 Euroleague Basketball have announced that Richard Stokes has been named as the organisation’s new Director of Refereeing.

Stokes, who hails from the UK, is regarded as ‘one of the top officiating experts in Europe’ and takes over from FIBA Hall of Fame referee Costas Rigas in managing the officiating of the top European cup competitions.

“Costas Rigas has guided basketball officiating in Europe to its best level ever. Under Costas, European referees as a collective became better and more professional than ever before, and we cannot thank him enough. We can only hope that he continues contributing to the growth of our sport,” said Euroleague President and CEO Jordi Bertomeu.

“In these 15 years, he has led the process of modernisation in officiating and has contributed to the incorporation of many new rules that have made our competitions a recognized standard leader in world basketball. He leaves as part of his legacy a renewed, young generation of referees whose great technical knowledge assures a strong future for European basketball officiating.

“In Richard Stokes we have gained a worthy successor, thanks to his experience, refereeing knowledge and familiarity with international referees. I am sure that he will continue the great work done in our refereeing department over the last 15 years.”

Stokes started his refereeing career at 18 before qualifying as a national referee two years later, becoming a FIBA referee in 1993. He refereed in the inaugural Euroleague season in 2000-01 and officiated the very first game in the new competition between Real Madrid and Olympiacos Piraeus on October 16, 2000.

Other accomplishments include officiating at 2003 EuroBasket before going on to become Head of FIBA Europe Competitions and Referee Department in 2011.

“Joining Euroleague Basketball is an exciting opportunity to be involved in the top men’s club competition in Europe as the Director, Refereeing. As such it brings also a great responsibility,” said the 48-year-old.

“I look forward to the challenge of delivering a programme of high-level officiating for the clubs, following the high standards previously established by my predecessor Costas Rigas.”