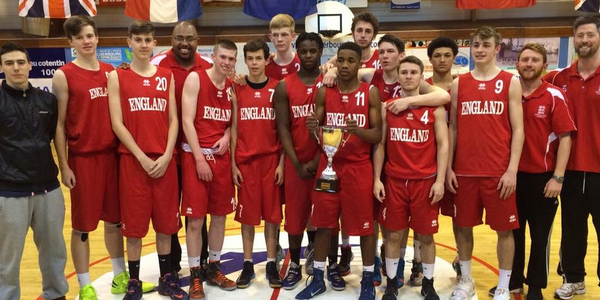 England under-17’s claimed bronze at the Cherbourg U18 Tournament after edging a dramatic double-overtime third/fourth playoff with Anjou BC.

“Overall, I believe the tournament was a great learning experience for our guys,” said Head Coach Stephen Barnes. “They gained an appreciation for the physicality and how mentally challenging European and tournament basketball is.

“To see the growth of us as a team, from the first game where we lost the game in that last two minutes to the final game where we came from behind and to go onto win in double over-time, is special and a feeling they will hold onto for a long time to come.”

In the tournament opener, England went down 56-52 to Paris, despite a 25-point haul from Keagan Allen. Stephen Barnes’ side bounced back with victories in their final two group games as they defeated Tunisia 52-47, and hosts Cherbourg with Jelani Watson-Gayle, MVP at the inaugural Hoopsfix All-Star classic last year, top scoring with 14 points in the clinical 68-31 win.

Manchester Magic’s U18 side also competed in the annual tournament and went on to finish as the runners-up after beating England 61-48 in the semi-finals having come from 11 points down at half-time. They would narrowly lose 86-85 in the final to Paris Levallois. Magic trio Reco Eaton-Barnes, Raheem Idris and Ayo Nuwe were named to the All-Tournament team as recognition for their performances.

For England’s under-17’s, they closed out the tournament with a tough 82-76 play-off victory over Anjou BC. Despite trailing by eight at half-time, England battled back and would eventually force overtime after Allen netted a three just before the buzzer.

A second period beyond regulation ensued after Rory Winter held his nerve at the line with two clutch free throws. In double OT, England stormed clear to take the win with Watson-Gayle finishing with 23 points, while Allen and Jhode Campbell added 15 and 10 points respectively.

England under-18’s side begin their latest camp this week as preparations step up ahead of the summer’s European Championships.