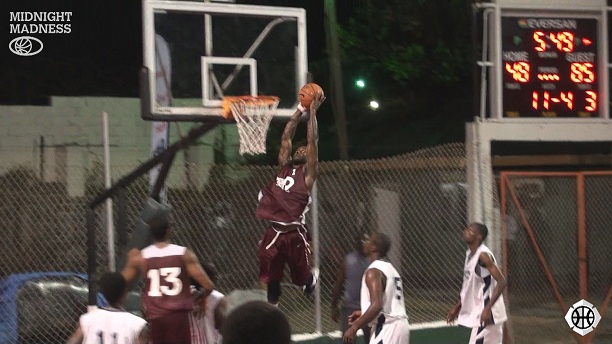 Watch back the highlights from Midnight Madness’ second game of the Independence Basketball Classic, facing off against Bedrock St Kitts, who featured the St Kitts & Nevis Minister of Sport, Glen Phillip (!).

Midnight Madness jumped out to a 10-0 lead, and despite Bedrock responding with an 8-0 run of their own, from there on out it was over.

Bedrock had pretty much given up by the fourth quarter, which turned into a bit of a dunk fest, with MM throwing down at least 5 in the quarter (plus couple of big misses). Madness had 30 steals (!).

Maxwell had 21 points, 11 rebounds and 4 blocked shots, Raheem had 17 points, 8 rebounds, 6 steals, Lamar beasted the glass again, hauling in 13 rebounds to go with his 10 points. Sam Toluwase had 14 points while Dwayne Lautier-Ogunleye dished out 6 assists.