Newly Named Knights Prepare for Rookie Season in the BBL

The new Birmingham based British Basketball League franchise has officially been crowned, being named the Birmingham Knights, as preparations are well underway to begin their first BBL season.

It will be the culmination of a two year journey for Oaks Consultancy, who were awarded the franchise by the league in 2011 to bring professional basketball back to the city for the first time since 2008 when the Panthers folded after just one year.

The Knights, who ran a competition to pick a name for the franchise, have already had trials, and begin to lay the foundations for a feeder system as they’ve set up links with teams across the second city.

Former Birmingham Bullets player and local Paul Douglas (pictured, below right) has been announced as the Head Coach and is excited to get the season going.

“I feel very excited and honoured too [to be selected as Head Coach], the owners have some big plans for the future of Birmingham basketball and the fact they feel comfortable with me leading the team going forward is very humbling.”

The team will play out of the Doug Ellis Sports Centre, where 1000 seats were delivered last week to make it a more spectator friendly venue for the city’s basketball fans, who have welcomed the team with open arms. 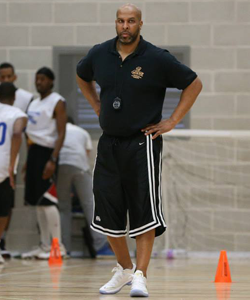 “Since being appointed Head Coach, I have heard nothing but positive comments and support from all avenues,” continued Douglas. “It is very pleasing to see the basketball community get right behind the team.”

“I am really excited about our new academy set up and of our future plans of player development for the city. I wanted to create something that if I was 16 again, I would definitely want to do,” Coach Douglas, who is more affectionately known as ‘Dougie’, enthused.

“We have formed links with Birmingham A’s as our senior feeder team and City of Birmingham as our junior outlet. As a young player in Birmingham you will be able to quite clearly see a pathway towards the professional level.”

The Knights held their first trials in May and had 78 players travel from across the world, some as far as Colombia, for the opportunity to become a part of the BBL team.

“I wanted to go down the combine route for the trials to make sure that everyone who attended knew what skill set I was looking for, and all those who made the cut were invited for further training sessions,” he added.

“We have started training now and it is coming together nicely. The players are really receptive and we should have a nice nucleus of home grown players.”

No roster has been announced as yet but Dougie was quick to emphasise how the team will be playing on court, claiming he wants a mixture of both European and US College style basketball.

“I really like the European game and I also like the US college game. I think a good mix of the two styles is what the English game should be. We will be working very hard to try and create that. I do not want to give too much away but we will play an up-tempo game for sure.”

In any professional league, the first season is always a tough one and Dougie seems to acknowledge that, but says not to count them out.

“I have always been a bit apprehensive saying in public where I think we will end up in a new season, but as a team and organisation we have goals that we would like to achieve. There will be some adjusting time for the players as a few will be new to BBL but if we come close to meeting the those goals we will definitely surprise a few people.”