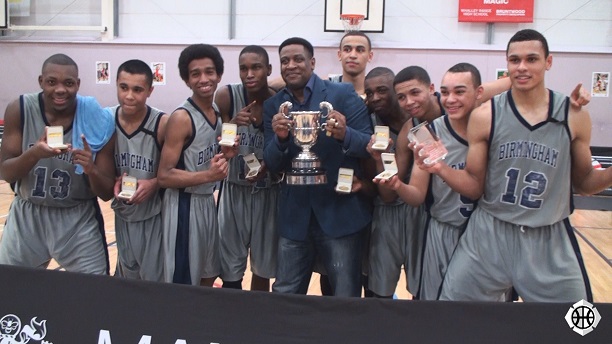 Birmingham A’s won their first junior cup title in what is believed to be over a decade as they defeated NASSA, 69-64, on Saturday afternoon at the Amaechi Centre, Manchester.

It was by no means easy, as they fought from behind a large part of the way, and with the score tied at 64 with under a minute left, guard Sedale Hanson-Young nailing a three pointer to give them the cushion they needed for the victory.

MVP Callum Lawson, who NASSA had no answer for all game as he finished with 31 points and 18 rebounds, sealed the win at the free throw line.

“Tough game, it was everything we thought it was going to be,” said Birmingham Head Coach Nigel Hanson. “We prepared well, we scouted well, NASSA played off the charts for a conference team, they were unbelievable. They beat Manchester (Magic, in the semi-finals) in Manchester, so we knew they could play.”

Emotions were running high with the win, after one of Birmingham’s players, Melusi Mututa passed away over the Christmas period.

“We put it together, we put some hard work into this and we were on a mission,” continued Hanson. “One of the kids died at Christmas and these guys have just got the attitude ‘if you’re gonna beat us, you’re going to have to play a real good game to beat us’. We’re just wired in right now and mentally so tough.”

“It was a great game and I’m happy to be a part of it,” said Lawson. “I’m happy with it (individual performance), but the Cup is what matters to the team, that’s history right there. Before we were just knocking on the door and now we’re letting people know we’re at the top; we just have to keep it up.”

Hanson had some high words of MVP Lawson, who went 13/25 from the floor and added 3 assists.

“Callum is the best big man in the country, 96 born. I’ll say it here and I’ll say it now. He’s proved it over and over again, hes played them all and beaten them all. He stretches them, he puts them in pick and roll situations, he posts them up. His foot work is impeccable, he’s the best stretch four in the country hands down.”

Javel Small led NASSA with 26 points, at times electrifying the crowd, and Kayode Dawkins finished with 18 and 10 rebounds, but it wasn’t enough.