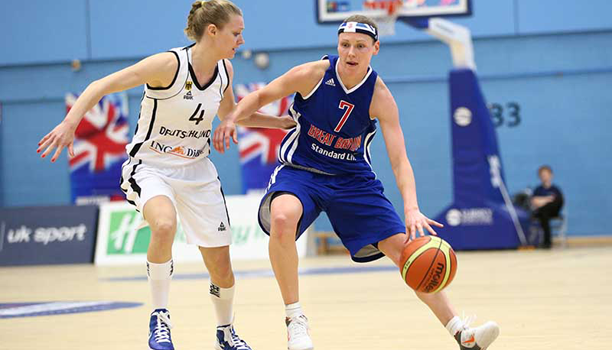 Great Britain picked up their second successive victory in the British Basketball Invitational Tournament with a dramatic 68-64 overtime win over Germany on Sunday at Surrey Sports Park.

Great Britain were the stronger team in the overtime period thanks in part to Rachael Vanderwal, whose three-pointer with almost three minutes remaining gave GB the lead for good at 62-59. Despite valiant German efforts, Vanderwal sealed the game in the final seconds from the free throw line.

Vanderwal commented on the crowds as she hit her three-pointer: “I had goose bumps, the crowd were amazing tonight; it was a great feeling.

“You’re just trying to be aggressive offensively and defensively and one of the keys going into this game was to attack.”

The game was also reason to celebrate for Wales-based guard Stef Collins, who become the first British international, male or female, to reach 100 caps.


In front of a capacity crowd, it was Great Britain who made the better start, going on a 6-0 run. Germany finally got going offensively and a 13-6 run gave the visitors a 13-12 lead. Both sides then exchanged baskets for the remainder of the first quarter with the hosts edging it, 17-16 in front.

The two teams continued to match each other offensively in the second, with Kim Butler and Roz Mason leading the charge for Great Britain. Late on in the half GB were finally able to pull away and when Rose Anderson scored a three-pointer in the final seconds, it gave the home side a 38-31 lead at the half.

Despite their hard work on offence, Great Britain struggled to translate their efforts into scores in the third quarter, allowing Germany to come back and tie the game 44-44 with a little over two minutes remaining. An immediate turnover would allow Vanderwal to give GB a 46-44 lead, the last score of the quarter.

In the fourth quarter Germany’s Anne Breitreiner scored three straight baskets to give Germany a 55-50 lead. But Gandy then led the Great Britain fight back with six straight unanswered points. Going into the final minute, Germany led by one 57-56.

Gandy, who led GB with 17 points commented: “My team-mates happened to get me the ball at the right time. We train on a breathing machine called a Hypoxic, and while Germany ran out of gas, we just kept going and going.”

Germany turned the ball in the final 30 seconds handing GB a final chance to win the game. Collins was fouled with 3.7 seconds remaining but could only score one of her two foul shots, tying the game 57-57. Germany then missed their final chance, sending the game to overtime where GB sealed the victory.

Head coach, Damian Jennings said: “It wasn’t as clinical as yesterday. We hit a bit of a drought offensively and it’s something we need to look at, but it’s very early still in our test period.”

Great Britain’s final game of the British Basketball Invitational Tournament is on Monday (tip-off 17:00) when they take on Greece, who are themselves undefeated following their 64-55 overtime win over Israel.

Jennings added: “Greece play a very up-tempo game, so it’s going to be a completely different game to Germany and Israel.”