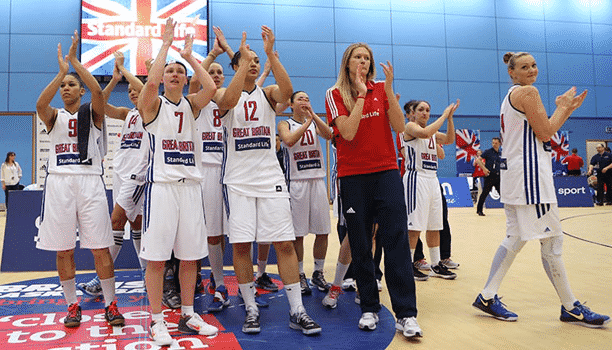 Standard Life GB Women’s head coach Damian Jennings says his side are on track to shine at next month’s EuroBasket Women, despite a narrow 69-66 defeat to Greece on Monday in the final game of the Standard Life British Basketball Invitational Tournament at Surrey Sports Park.

In a game that went down to the wire, the hosts rallied from six points down in the last minute but could not quite force overtime. Nevertheless Jennings believes the four-nation tournament, won by the Greeks, has toughened his squad up for their European adventure in France next month.

“It’s a difficult situation,” said Jennings of the final play. “With three weeks’ preparation we’re not ready to be to be in those types of situations yet, but it was a coaching decision to layer our learning and we’ll be ready for EuroBasket.”


Greece had jumped out to a quick 5-0 lead, but a three-pointer from Steph Gandy ignited a 7-2 run before the guests hit back to level before surging 17-11 ahead. However a late GB charge, sparked by a three-pointer by Georgia Jones, cut the deficit to 19-16.

GB trailed by seven points for a large part of the second period, but hit back late in the quarter. Rachel Vanderwal sank a baseline jumper that sparked an 8-0 run for GB, edging into a 32-31 lead through Dominique Allen.

A free-throw for Greece tied the game with six seconds remaining but Lauren Thomas-Johnson downed a basket at the buzzer that gave the home side a 34-32 halftime lead.

In the third quarter, GB took control of the game, taking a 50-42 lead on a baseline jumper from Thomas-Johnson, before the Greeks hit back to cut the deficit to 52-50, heading into the final ten minutes.

The teams traded baskets in the fourth and were tied 61-61 with a little over two minutes remaining. However the visitors took control with a 6-0 run with a minute left that ultimately proved decisive.

“I think Greece started by setting the tone and then we came out and finished the half really well,” said Allen, who scored a team-best 10 points.

“It’s been an amazing weekend, we’ve only been together for two or three weeks. I think it’s been a great tournament and now we’ve got stuff to work on before next weekend.”

GB conclude their pre-EuroBasket schedule next weekend when they head to Sweden for a three-team tournament, where they will take on the hosts as well as Turkey and Latvia.

The win for Greece confirmed them as tournament winners, Great Britain finished second, with Germany finishing third following their 72-67 win over Israel on Monday.

British Basketball’s National Teams Director, Warwick Cann summed up the tournament and the progress so far, he said: ” I think the coaching team are making good progress in preparing the team. The players are committed and the collective GB spirit is very good. A number of young players have also been introduced to international senior competition and now our focus is not only on EuroBasket but beyond.”