The 2011 EBL Junior Final Fours took place this past weekend, with the top four teams in the U14, U16 and U18 age groups fighting it out for the right to be called National Champions. See below for full results, leading scorers plus a few notes: 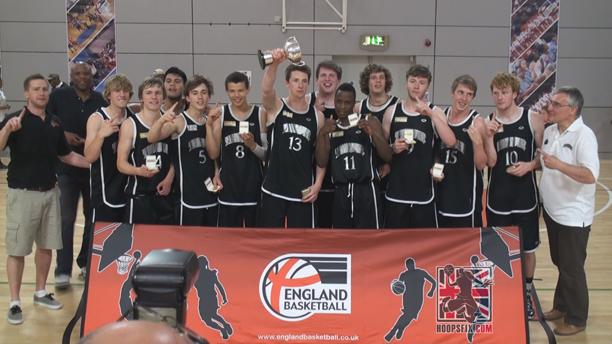 Worthing Thunder came up clutch to win the 2011 Under 18 National Championship on Sunday, defeating Cheshire Jets 83-81 on a Kyifer Del Mundo gamewinner with 8.1 seconds left.

With Cheshire up 81-80 and the clock ticking down, Worthing’s Del Mundo penetrated into the lane, took the contact and made the basket and-1. He calmly hit the free throw, putting Worthing up by 2, 83-81 with 8 seconds left; Cheshire’s 3 point gamewinning attempt hit the back of the rim and the celebrations ensued. Watch video of the last 1 minute and 20 seconds of the game here.

Del Mundo was named MVP, finishing with 13 points and 9 rebounds, whilst Luke Nelson led all Worthing scorers with 18 points. Greg Krippa had 20 points to lead Cheshire, whilst Niel Gillard and Mike Hinchcliffe had 16 points a peice with the latter adding 12 rebounds.

Full stats and play by play can be found here.

Semi-final 1
Worthing Thunder came from behind to beat Leicester 100-90 behind 31 points from Jackie Sunderland. Kyifer Del Mundo had 19 whilst Joe Carter added 18 points for the south coast side. Raphell Thomas-Edwards, who fouled out with 4 minutes to play, led Leicester with 32, whilst Elliot Sentance added 26 and captain Naveen Kala-Lee had 16.

Semi-final 2
In a very scrappy low scoring affair, Cheshire Jets shocked Manchester Magic, winning 66-64 to book their place in the final. Cheshire were led by Niel Gillard’s 21 points, whilst Greg Krippa added 16. Dujon Lattie had 14 to lead the Magic whilst John Gould and Jack Crook added 10 points a peice.

Manchester Magic added to their season’s silverware on Saturday with the Under 16 National Championship, after beating Cheshire Jets 77-70 in the final behind an 18 point-18 rebound-4 block MVP performance from rising star Tamas Okros (1995 born).

With Cheshire leading 62-50 after three quarters and firmly in control, a Magic comeback was looking increasingly unlikely. However, Manchester’s dimunitive point guard Kayin Derby, sparked a 19-3 fourth quarter run, scoring 10 of his game-high 28 points to give Magic the lead, at 69-65, with just under 4 minutes left in the game.

Despite a small surge from Cheshire, the moment was all Manchester’s as they managed to hold on, sealing the victory and another championship for the club. Manchester’s Conor Porter had a great all around game, finishing with 18 points, 10 rebounds, 6 assists and 5 steals, whilst Cameron Mackay led Cheshire with 25 points on 10/19 shooting (5/8 from deep, 18 in the first half), and Greg Krippa had 17 points, 8 rebounds, 6 assists and 3 steals.

Cheshire were without England U16 player and captain Jack Griffiths who was injured in the last 30 seconds of the semi final against Solent.

Box score and play by play can be found here.

In the third place playoff, Solent Kestrels routed Worthing Thunder 83-48 to finish 3rd in the country. Kestrels were led by 24 points from Jack England whilst Tristan Hall added 21. Luke Nelson (20) and Max Richardson (19) combined for 39 of the Thunder’s 48 points.

Semi-final 1
Cheshire dispatched of Solent 70-58 in the first semi final of the day. Cheshire were led by 14 points from Jack Griffiths, whilst Adam Mears and Matthew Dickinson added 12 each respectively and Greg Krippa had 10. E Dapps and George Beard led Solent with 14 points a peice.

Semi-final 2
In a battle of the two top prospects in the tournament, Tamas Okros’ Manchester Magic got the better of Luke Nelson’s Worthing Thunder, winning 106-86. Both Okros and Nelson finished with 37 points each.

Manchester Magic added yet another championship to their belt, this time in the Under 14s division, with a 91-65 drubbing of NASSA in the final on Sunday.

Joe Swindells was named MVP, finishing with a 28 point-10 rebound double double, whilst adding 4 assists and 3 steals on 11/19 shooting. He was backed up by 20 points from Raheem Idris whilst Calvin Kintu and Benjamin Maranan led NASSA with 20 and 13 points each respectively.

Stats and play by play can be found here.

Semi-final 2
NASSA beat Haringey 87-79. NASSA were led by 25 points from Jonathan James whilst Ben Maranan added 16 and Ricardo Guddemi had 10. J. Small led Haringey with 24 points, whilst D. Mullings had 19.

Did you attend the EBL Junior Final Fours? Thoughts? Who impressed you? Surprises? Drop a comment and let us know!