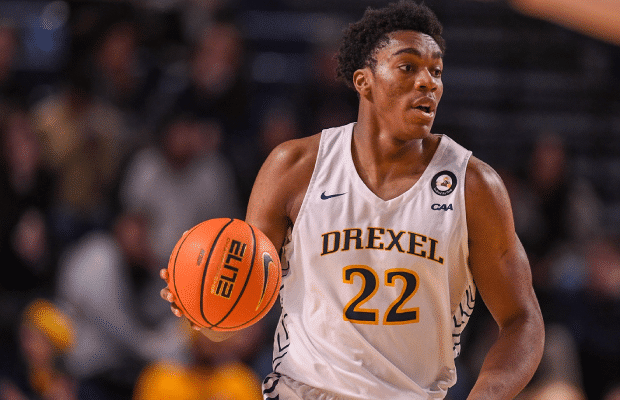 The college season in the US is in full swing heading into 2023, so it’s time to check in on how the top Brits are getting on.

We take a look back on the season so far with plenty of action through November and December in Divisions 1 and 2.

The reigning Ivy League Player of the Year started the new season with 22 points as Princeton (10-4) began with back-to-back defeats. Evbuomwan returned home for the London Classic and picked up MVP honors with 14 and 13 points respectively in the two wins. He posted a first double-double on the season with 16 points and 13 rebounds at Drexel and closed 2022 with nine points, six rebounds and six steals in a win over Harvard.

Williams has continued where he left off after a breakout year with the Dragons. The junior forward has scored at least nine points in every game so far this season for Drexel (8-6) with five double-doubles including four straight games with 10+ rebounds in December. Williams netted 20 points in the second game of the season and repeated the feat two games later with an 18-point haul to close 2022 with an average of 14.4 points per game.

Juozapaitis hit the ground running with 20 points on debut for Maine (7-7) and produced a season-high of 22 points later in November. The fifth year guard closed the month with 19 points and repeated the feat in their final game of 2022 in a tough OT loss at Harvard – heading into the New Year averaging 13.8 points per game. He also retuned to London in a tough 61-62 loss against Marist.

Hildreth was inserted into the starting lineup in the fifth game of the season with Wake Forest (10-4) and it sparked a run of nine consecutive games with 10+ points. The sophomore guard had a best of 19 points before recording a triple-double of 14 points, 11 rebounds and 10 assists with Hildreth also adding a 16-point effort in a win over #14 ranked Duke.

Best of the rest

Jubrile Belo is averaging 12.7 points per game as one of the British trio at Montana State (8-7). The senior forward netted a best of 23 points in November to spark a run of 10 games in 11 in double figures in scoring with two double-doubles including 20 points and 10 rebounds in just 16 minutes in an emphatic 144-59 win. Caleb Fuller scored 13 points – for the third time – in the same game having also recorded a double-double earlier in the season, while Great Osobor put up 23 points and 11 rebounds and is averaging 8.6 points per game coming off the bench.

Matt Marsh has also started well for Wake Forest with a season-high 14 points off the bench in November and posted a first double-double of 13 points (6-6 FG) and 11 rebounds against LSU to earn a run in the starting lineup. He also went 5-of-5 for 10 points and five rebounds in the aforementioned win against Duke.

Ethan Price is averaging 9.3 points per game at Eastern Washington (8-7) with a run of five straight games in double figures in scoring in late December including a best of 16 points along with eight rebounds at South Dakota State. Senior guard Mate Okros had five points, 10 rebounds and five assists in an early season game for Drexel (8-6) before reaching double figures for the first time with 12 points against Indiana State having been in the starting lineup alongside Williams.

Josh Uduje has started every game for Coastal Carolina with the sophomore averaging 11.4 points per game heading into 2023 with a best performance of 20 points coming in the second game of the season before scoring in double figures in seven of the last nine games.

Sam Alajiki scored 10 points off the bench in November before recording nine points and nine rebounds from the start in the following game for Cal (2-13). Eduardo Andre had a double-double of 10 points and 12 rebounds for Fresno State (5-8) during November, while Toto Fagbenle produced a season’s best of 14 points along with six steals to earn a first start with Morgan State (5-8) in the next outing.

Ade Adebayo had back-to-back games in double figures to end November with a best of 13 points in a win for UC Davis (7-6) in a win in the Milwaukee Tournament with Jonathan Brown doing the same for Montana (7-7) with 13 points, three rebounds and three steals in 35 minutes of a 63-51 win. Nelson Boachie-Yiadom has started every game for Hofstra (8-7) with one game in double figures in scoring, whilst averaging 5.1 rebounds per game and coming up with six blocks in a single game in November.

Tariq Balogun opened the season with a best of 17 points in 15 minutes in a win for Binghampton (4-10) and also had 16 points in November with the junior forward averaging 6.8 points per game so far. Kaiyem Cleary also netted 17 points on debut for Ball State (9-4) with 6-of-9 shooting in their 109-39 thrashing of Earlham.

Dan Akin is averaging 12.6 points and 7.1 rebounds for Utah State (12-2) with four double-doubles so far including season-highs of 21 points and 15 rebounds against San Diego having only started one game so far. Teammate RJ Eytle-Rock had a standout game of 17 points in a big win during December.

Alex Tew put up a best of 15 points on 7-of-8 shooting for Weber State in November and also had back-to-back games in double figures in late December, while freshman Louie Jordan has scored three points in three separate games.

Redshirt freshman Giovanni Emejuru started strong with 16 points on 8-of-9 shooting on debut for Sam Houston (11-3) with a further 14 points without a miss coming at the start of December. Freshman Toibu Lawal posted season-highs of 10 points, five rebounds and three blocks in a first – and only – start with VCU (10-4).

The big man said he could do this all day. Giovanni Emejuru leads the Kats with 1️⃣0️⃣ points at the break on 🖐 dunks.#EatEmUpKats pic.twitter.com/5titY5R1ii

Josh Ogundele had a best display of six points and five boards for Iowa (8-5) at the start of the season, while AJ Edu produced seven points and seven rebounds in 17 minutes off the bench for Toledo (9-4) in December. Theo Hughes collected 10 rebounds to go with five points for UNC (5-9) in December and closed the year with a season-high of six points along with nine rebounds in an overtime loss to Idaho.

Russell started the season with a 9-10-7 stat-line and has reached double figures in scoring in every game since for Florida Tech (10-3) including 28 points in late November. The senior guard fired in a career-high of 37 points in an 84-72 win over Thomas (GA) as another 30-point effort followed two games later with Russell also dishing out 10 assists to go with 20 points in the penultimate game of the calendar year.

🇬🇧 Sesan Russell had an exceptional weekend with a career-high 37 points to follow up a 17p/11a dbl dbl, helping Florida Tech move to 8-1

Sagna has scored 10+ points in all but two of 13 appearances so far for Minnesota Crookston (1-13) having opened the season with 21 points. He posted eight points, six rebounds and five assists in the team’s only win of the season in November. Sagna then fired in 26 points against Bemidiji State before closing 2022 with a further 25-point haul – shooting above 40% from three so far.

Best of the rest

It’s not just Russell shining at Florida Tech: Niall Harris is putting up 12.0 points per game; matching a career-high of 26 points at Saint Leo before recording a triple-double of 15 points, 12 rebounds and 12 assists against Johnson (FL). Sam Grant posted a career-high 20 points on 8-of-12 shooting in the same game before reverting to a role off the bench through December

Tomiwa Sulaiman is averaging just shy of 12.0 points as well as 8.2 rebounds per game for IUP (11-0) in their perfect start to the season. The sophomore forward has four double-doubles so far including season-highs of 21 points and 12 rebounds against Kutztown to follow a first 20-point display in the previous encounter.

Obi Agu started December with a season-high of 18 points for Northeastern State (6-4), while Ben Tew also has the solitary game in double figures having netted 14 points in an early season victory for Saginaw Valley State (7-6). Peter Turay produced a personal best of nine points in action for the UWA Tigers (11-2) in their strong start having been the MVP at the inaugural Hoopsfix Pro-Am.

Meanwhile, Sean Trumper top scored with 20 points at the start of December and followed with 17 and 18 points respectively in back-to-back wins for Franklin Pierce (7-4). Senior guard Eisley Swaine has been a regular starter for Findlay (8-5) with season-highs of nine points on two occasions including in a 76-68 victory to open the second month of the season.

Nathaniel Powell posted a double-double of 11 points and 11 rebounds for UTBP (8-6) in November and finished the month with a season’s best of 17 points in beating Jarvis Christian. The junior also contributed 10 points and eight rebounds having found a new role off the bench in December.

The last appearance for Jordan Oji at St Augustine’s came at the end of November with the sophomore centre scoring his first points with a 12-point display along with four rebounds and a block in just 10 minutes of action. Matthew Allman had a showing of 16 points and seven rebounds for Minnesota Crookston (1-13) in November and returned to the starting lineup in late December with a season-high of 17 points.

Aaron Badibo closed 2022 with his best showing with seven points and four boards in 12 minutes off the bench as Malone (9-2) picked up another victory.