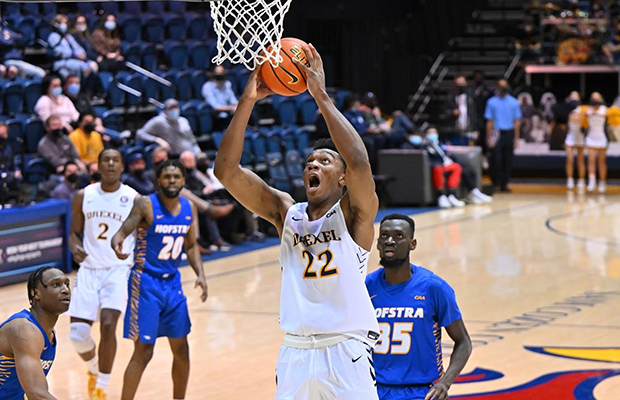 Amari Williams has been named the 2021-22 Colonial Athletic Association’s Defensive Player of the Year, along with CAA All-Third team.

The former GB Under-18 and Hoopsfix All-Star Classic alumnus had a breakout season in his second year with the Dragons.

He led the CAA in blocked shots with more than two per game, while averaging 9.7 points and 7.3 rebounds on 52.7% shooting from the field.

The former Myerscough big man had six double-doubles, including a 20-point, 19-rebound performance against UNCW. The 19 rebounds were the most for a Drexel player since Malik Rose had 19 in March of 1996.

Williams and Drexel now head into the postseason with a 15-13 record and a 10-8 mark in CAA play. The 10 wins are the most the team has had in league play since the 2011-12 team finished 16-2, as they have now guaranteed themselves their second consecutive season above .500 for only the second time in the last 17 years.

Drexel will begin play in the Colonial Athletic Association Championship on Sunday afternoon in Washington, D.C. as the fourth seed in the tournament and will play Delaware.