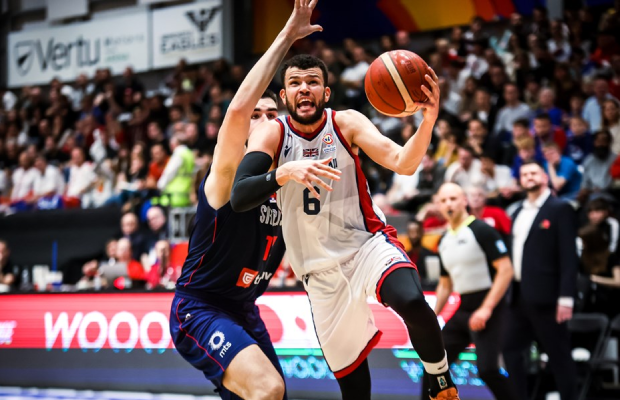 Great Britain were dealt a serious blow with their hopes for FIBA Basketball World Cup 2023 qualification being ended with a 68-74 loss to Serbia on Friday night in Newcastle.

A valiant fourth quarter come back fell short, overturning a double digit deficit to get within two in the final minute but Serbia responded immediately with an Ognjen Jaramaz lay-up that would be the final dagger.

Gabe Olaseni led all GB scorers with 20 points and 7 rebounds, Luke Nelson had 15 and Patrick Whelan joined them in double figures with 10.

“We’re past the point of moral victories, we’re at the point where wins feel great and losses feel miserable, there’s no in between,” Olaseni said after the game.

“We’ve got a good group of guys and great coaching staff, and now we’re focusing on Monday and playing for the programme.”

“For us, I think like every team in these windows it’s trying to find the right rhythm at the right times. In the fourth I felt like we were really there, within a couple of possessions to get our nose in front…I am so proud of the guys, who go above and beyond and do everything can for the jersey.”

Dusan Ristic had 15 points and 11 rebounds to lead Serbia.

Luke Nelson carried the load early, dropping 11 points and 2 assists on 4/5 shooting in the first quarter, before a Gabe dunk to beat the buzzer pulled GB back to 20-21 after 1.

Marc Steutel’s side kept it within striking distance until a Nelson layup with 4:46 left in the half gave GB their first lead in the game but Serbia responded right back with a 3 to regain control and keep GB chasing.

A Radanov dunk down the lane gave Serbia their biggest lead of the game 50-44 midway through the third period forcing Steutel into a timeout.

It gave them the cushion they needed. The lead extended to double digits early in the fourth and they held off GB the rest of the way.