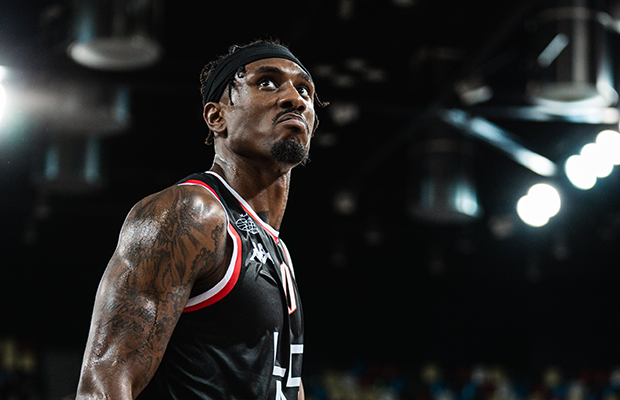 London Lions picked up a historic first win in the EuroCup, defeating Aquila Basket Trento 80-75 at the Copper Box Arena on Tuesday evening.

Lions came from behind, riding the crowd to finish the game on an 10-1 run to steal one despite being short-handed with both Sam Dekker and Kosta Koufos ruled out with injury.

It marks the first time a British team has won in the EuroCup since 2004.

“We don’t win that game without the fans getting behind us, especially down the stretch,” Lions Head Coach Ryan Schmidt said after the game.

“Any time you make history and do something for the first time in 18 years, it’s something to be proud of. These guys deserve it, they fought, they’ve done a really good job of coming together.

Ovie Soko was dominant, finishing with 22 points, 13 rebounds and 3 assists on 5-of-8 shooting, Vojtech Hruban had 17 points and 5 assists, while Tomislav Zubcic added 13 points.

“Ovie was remarkable tonight and that was a big part of our game plan,” Schimdt added.

“We thought we had an advantage inside with him and Zubo (Zubcic) in particular and we needed to control the tempo of the game. I thought Ovie came in and was remarkable, stepped up to lead us from start to finish.”

Ovie Soko got off to a hot start scoring 13 of London Lion’s first 16 points including a thunderous dunk down the lane, but it was Trento who held a 27-21 lead after the opening period.

A Luke Nelson pull up three, followed by a Zubcic steal and dunk pulled Lions back to within 1, 32-33 with 5 minutes left in the half. Trento led 44-41 at halftime.

A Mo Soluade steal and three, followed by a Josh Sharma bucket inside saw Lions bring it back to three, 55-58 forcing Trento into a timeout. Zubcic followed it with another triple to tie it up, sending the Copper Box into a frenzy to finish the quarter.

In the fourth, a steal and big dunk from Spagnolo pushed the Trento cushion to 6 with 3:49 remaining, however, Lions refused to go away, reeling off their big finish to pick up the win.