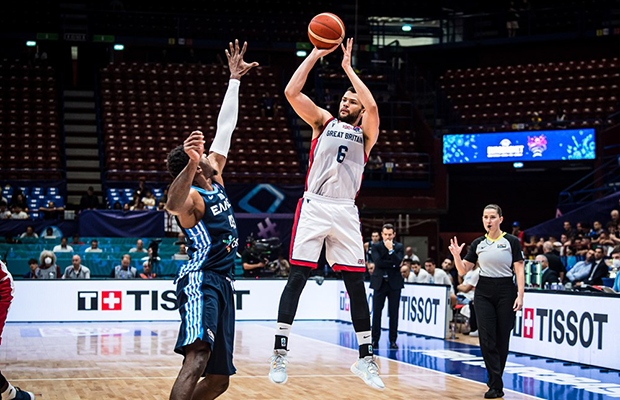 Great Britain remain winless at EuroBasket as they suffered a 77-93 defeat at the hands of Greece on Monday afternoon in Milan, Italy.

GB fought valiantly, pushing Greece – who rested Giannis Antetokounmpo – before ultimately coming up short with another slow third period that would prove to be their undoing.

“It seems like it’s the third period for us that we crack, and turn it over. It’s hard to overcome 26 points from turnovers when you’re playing a great team,” GB Head Coach Nate Reinking said.

Kostas Sloukas was the hot hand for the Greek side, going 8/10 from the field on his way to 21 points along with 5 assists, spoiling the celebrations for Dan Clark breaking the all-time GB cap record with 117 appearances.

“They proved today they are more than just one player,” Dan Clark said. “I think we hung around with them for the majority of the game and proved we can compete with that level of team but again we let ourselves down for a period of the game. There’s a lot of things to work on from our point of view but I think there are more positives for us than the previous two games.”