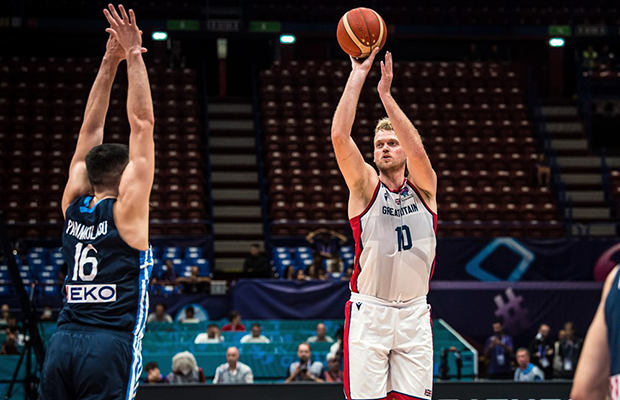 Dan Clark has officially broken the all-time Great Britain men’s cap record, recording his 117th appearance for GB against Greece at EuroBasket on Monday in Milan.

He surpassed the previous record of 116 held by Eric Boateng, adding to his accomplishments of being the men’s all-time points and rebounds leader.

After breaking the @gbbasketball all-time caps record, @Dan00Clark answers the question how much longer he is going to do this for & reflects on the journey to 117 caps 🇬🇧🏀 pic.twitter.com/HcFFaBuLvw

Clark made his debut for Great Britain in 2009, representing the national team at all five of their EuroBasket appearances as well as at the London 2012 Olympics, and has been a shining example for British Basketball at both international and club level.

“Great Britain Basketball has always been more about the team than me or any other individual involved in it, so it is hard for me now to sit here and celebrate an individual achievement to be honest, because I would trade them all in for the team to win something,” Clark said, reflecting on his accomplishment.

“It is something really special to me, of course, and I am really proud to be reaching this milestone. Ever since the first game in 2009 it has been a great journey, but this has never been the end goal to get to this point – I’ve just wanted to enjoy the journey and get as much out of it as possible.”

“Looking back, it is easy to remember certain games and moments in those games and there are lots of great moments, but the beautiful thing for me has been the journey I’ve shared with everybody.

“Playing for the National Team is the greatest pride you can have, especially representing the team at a EuroBasket or an Olympics Games.”

Clark will record at least another 2 caps before GB’s EuroBasket campaign is over, facing off against Estonia today and Italy on Thursday to round out the Group Phase (find out where to watch here).