GB Under-18 Women show promise in loss to Croatia, now 1-2 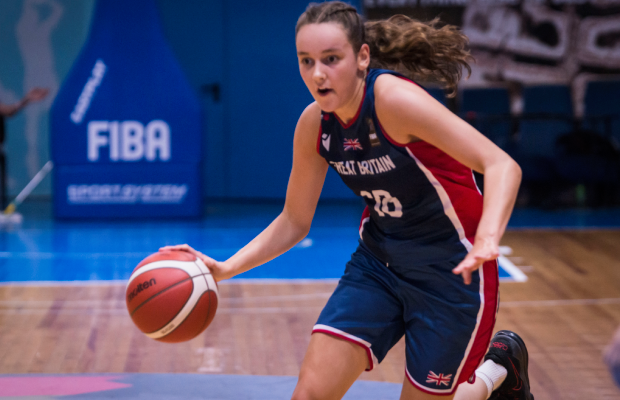 Great Britain’s Under-18s were beaten 70-52 by Croatia for their second loss in their Division B campaign at the European Championship, on Tuesday.

The defeat all but ends their hopes of promotion for another year with a final group game to come against unbeaten Portugal, though Kenrick Liburd’s side can be encouraged by the performance.

Bunyan opened the scoring from beyond the arc as GB looked to carry over their momentum from Monday’s strong second half display against North Macedonia. The 2022 Hoopsfix All-Star Classic Under-19 Women’s MVP had the hot hand early on with seven points without a miss in a 9-4 opening.

Croatia scored the next six points to move ahead, but Bunyan soon moved into double figures in scoring, whilst registering a fourth block at the other end. Charli Wroe’s driving score put GB ahead by five at 18-13 before Croatia responded with an 11-1 run across quarters.

GB endured another offensive slump in the second quarter – as they had done the previous day – with a five-minute wait for a field goal until Katie Januszewska connected from three-point range.

Wroe later followed suit with a corner three as Croatia had established a seven-point cushion to take a 34-27 lead into the half-time interval. The gap was stretched into double figures at the start of the third as GB were in need of another second half spark.

Carys Roy stopped the rot with a pair of free throws and a three from Fatmata Janneh was followed by Leia Edwards’ and-1. When Januszewska converted another and-1 later in the quarter, GB were back to within four points – only for another pivotal Croatian run to make it 52-40 early in the fourth.

Bunyan scored successive baskets in a brief bright spell for GB, but they eventually fell to an 18-point loss despite another improved display.

– GB drop to 1-2 in Group A with one game to play
– They next face Portugal at 2pm on Wednesday
– GB had the same starting lineup of Charity, Januszewska, Bunyan, Edwards & Roy
– GB were 4-of-29 from 3PT with 32 turnovers