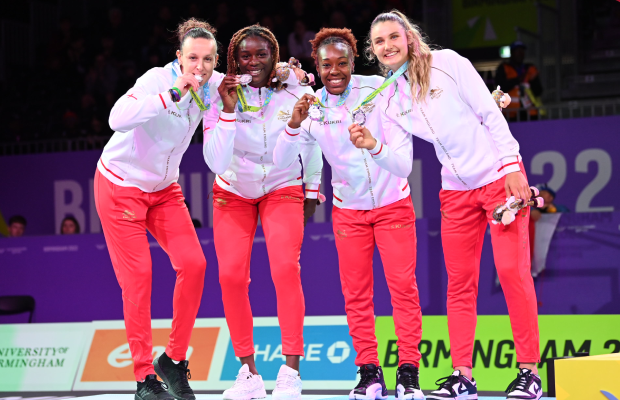 England’s Women came agonisingly short of the gold medal at the 2022 Commonwealth Games after Canada snatched a 14-13 victory at the buzzer in the 3×3 final.

Sarah Te-Biasu drove to the basket to lay in the game-winner in a heartbreaking finish for England as they had appeared to be heading to overtime.

The quartet of Chantelle Handy, Shanice Beckford-Norton, Cheridene Green and Hannah Jump emulate the 5-on-5 silver medal from the previous Commonwealth Games in 2018 after an impressive effort in Birmingham.

Jump’s trademark two-pointer gave England their first lead at 4-3, but it would prove a physical battle as defences gave up nothing easy in the final. The game was tied at 8-8 at the midway point of the 10-minute encounter before Canada kept the hosts scoreless for almost three minutes to open up a 12-9 gap with 1:55 remaining.

Beckford-Norton stopped the rot, and then hit from outside in the final minute after the three-point deficit had been restored. Green got the defensive stop followed by the crucial score inside to tie the game – but with less than five seconds on the clock, Te-Biasu was not to be denied to take gold.