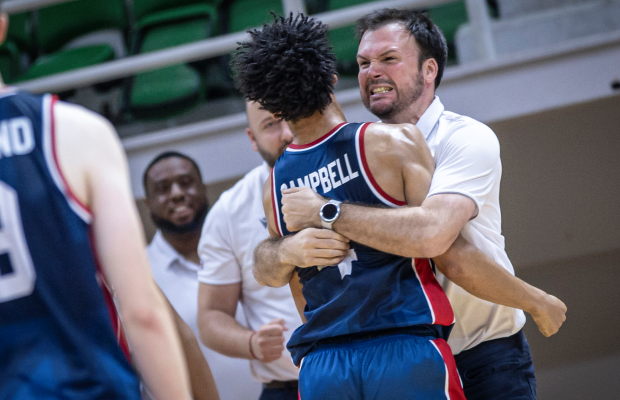 Great Britain Under-18s rounded out the group phase action with their first win at the FIBA U18 European Championship after beating North Macedonia 71-69, on Monday.

Craig Nicol’s side advance to the Round of 16 stage with some much needed momentum after two heavy defeats in the first two days.

🎯 | Lane Campbell (@lcxmpbell5) with the dagger inside the final minute to finish with 19 PTS (5 3PM) in the @gbbasketball U18s win!

Lane Campbell came up with some clutch shots in the fourth to finish with a game-high 19 points along with nine rebounds in the win. Ben Brown added 14 points and six assists with Ben Michaels also in double figures with 10 points and Latrell Davis had eight points and 11 boards.

Michaels got GB up and running with an early three, while Dijarn Russell Walters was also on the scoresheet early after being inserted into the starting lineup alongside Campbell.

Brown’s triple sparked a 9-4 run with Dara Adeyemi making plays at both ends – including a big rejection – though GB would end the first quarter trailing 17-16.

GB quickly moved ahead at the start of the second and established a seven-point cushion through five straight points from Campbell. North Macedonia closed the gap, but further threes from Brown and Campbell ensured their side led 36-33 at the half-time break.

Michaels and Louie Tucker joined in on the block party in the third quarter as GB’s defence stood firm in limiting their opponents to just four points in seven minutes of the period. However, they were unable to pull away as the endured their own scoring drought of over four minutes to fall behind in an 11-0 spell.

There was another twist as Michaels capped a quickfire 7-2 burst in the final minute to edge GB back ahead at 50-49 going into the final quarter.

The lead changed hands throughout the fourth as a tense finale ensued with North Macedonia making the first move to open up a 62-58 advantage.

Come for the hustle recovery, stay for the ball movement 😍

Campbell fired in a three to cut the gap after some nice ball movement and Davis’ putback restored GB’s lead at 63-62 before Campbell struck again from outside inside the final minute. Michaels would follow suit from outside to all but make sure of the win.

GB now likely avoid Spain – on course to win Group B – in the Round of 16 stage on Wednesday, but could still face tough opposition in the form of hosts Turkey with the matchup to be confirmed later.

– GB finish in third place of Group A with a 1-2 record
– They will face the second place team in Group in the Round of 16 on Wednesday
– GB starters: Campbell, Brown, Davis, Michaels & Russell-Walters
– GB were 11-of-45 from three-point range with 19 fast break points