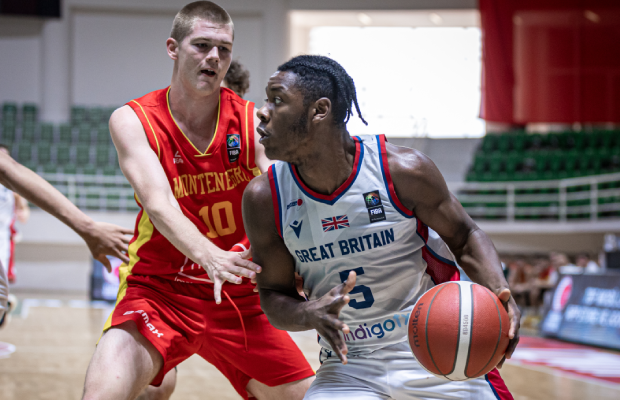 Great Britain’s Under-18s rounded out a disappointing campaign at the FIBA U18 European Championship by beating Montenegro 78-74 in Izmir, on Sunday morning.

Craig Nicol’s side had their relegation back to Division B confirmed less than 24 hours earlier, but avoided finishing bottom with their second win of the tournament.

Latrell Davis had another big game with 26 points along with nine rebounds to lead the way in the win.

Nedas Cholevinskas contributed 11 points and nine rebounds with Isaac Round also in double figures with 10 points after being given the start.

GB were 10-4 down early on, but closed the gap as Joe Buchanan hit a three with his side down 19-16 after 10 minutes. The gap grew to five points late in the second before a triple from Round and a mazy run from Ben Brown saw GB trail by just a single point at half-time, down 36-35.

GB fell 54-48 behind in the third before putting together a pivotal 14-0 run across quarters as Davis’ three put his side up by eight early in the final quarter.

Montenegro closed the gap to just three points, but another triple from Davis doubled the advantage with 3:27 remaining and GB held on down the stretch to ice the game from the line.