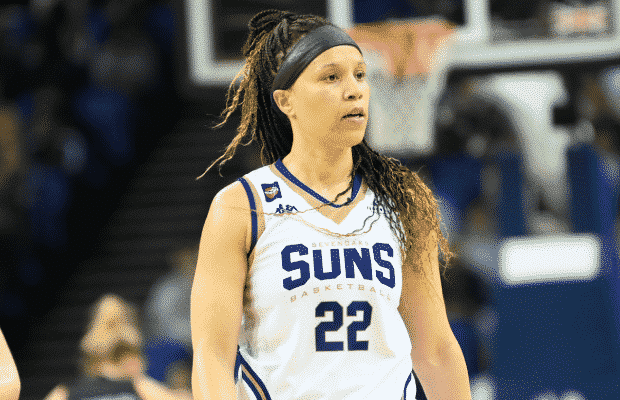 Cat Carr has officially announced her retirement from professional basketball with a special column on the WBBL website.

The American has spent over a decade playing in the UK, starting at Northumbria, and was an ever-present in the WBBL with Sevenoaks Suns, twice becoming the league’s MVP and winning eight pieces of silverware with the club.

Carr is the league’s all-time scorer in points and rebounds – the only player to pass the 1000 mark in the WBBL Championship – and also ranks second in assists having been a consistently dominant performer.

“I’ve been saying that I might retire for probably the past three years,” said Carr via the WBBL. “Last year I really did think that I was going to be done playing, but it is hard to come to grips with hanging up your boots and moving on, because basketball has been such a big part of my life.

“Saying to myself when I came back this year that this season would be my last allowed me to fully embrace every moment from the games to the practices, my friendships and all those things. I’ve sacrificed a lot being here for the last 10 years and I get married at the end of this year so I want to stay at home and enjoy uninterrupted time with family and friends.

“I’ve definitely worked for everything that has come my way and I’m super grateful for everything I’ve achieved. When I came to Sevenoaks in the beginning we weren’t very good, so for the club to be where it is now is a reflection of the time and effort that I and others have put in to changing that.”

The 33-year-old’s final game was earlier this month as Sevenoaks were beaten by London Lions at The O2 Arena in the WBBL playoffs final. Carr had helped the Suns win three straight playoffs titles from 2017-2019 and also won the WBBL Championship on three occasions.