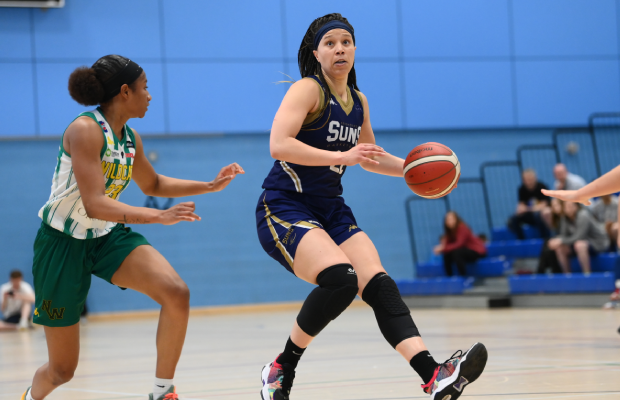 London Lions and Sevenoaks Suns will contest the 2022 WBBL playoffs final after coming through contrasting semi-finals at the weekend.

Three-time winners Sevenoaks had to hold off fifth seeds Nottingham Wildcats for a 66-64 victory, while the defending champions London powered past sixth seeds Caledonia Pride in a 105-59 success for their 33rd win in 33 domestic games this season.

Sevenoaks had lost to Nottingham during the last month of the regular season, but made a strong start at Surrey Sports Park as they opened up a 23-14 advantage. The visitors were down 12 in the second before an 8-0 close – including six straight points from Shaunay Edmonds made it a four-point game at 42-38.

Points were hard to come by in the third as the Suns edged the quarter 12-9 to stay ahead, but the Wildcats refused to give up and set up a nervy finish with an 11-2 run to close within two points with 45 seconds remaining. However, Sevenoaks held firm to reach a fourth playoffs final as Janice Monakana finished with 24 points, eight rebounds and seven steals in the win.

Meanwhile, London moved to within one win of an incredible clean sweep of WBBL silverware this season as they swept aside the spirited challenge of Caledonia. Holly Winterburn scored 21 of a game-high 29 points in the first half, while Shanice Beckford-Norton added 19 points in as many minutes.

The Lions set their stall out with 30 points in the opening 10 minutes and maintained their scoring pace as they established a commanding 59-35 lead heading into the half-time break. The scoring slowed in the second half with the result all but confirmed, though their defence continued to stifle their opponents – allowing just eight points in the fourth to ice the victory.

Laken James had 23 points in a full 40-minute effort as Pride’s best-ever season came to an end having reached the semi-finals of the playoffs for the first time.

London and Sevenoaks meet for a fourth time this season to decide the final piece of silverware on offer.