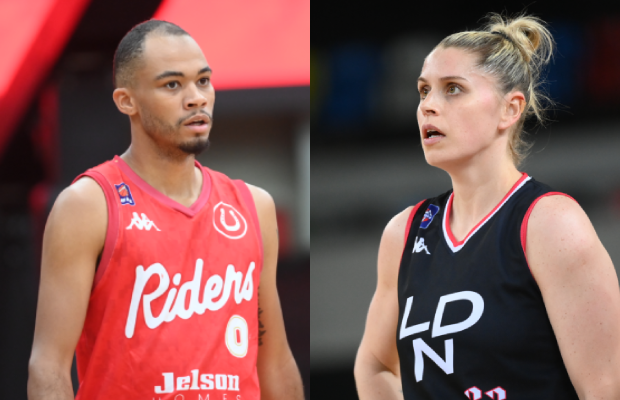 Geno Crandall and Jo Leedham-Warner have both earned the top honour of Player of the Year in the annual Basketball Journalists Association (BJA) awards.

It marks the second year in a row that Crandall has scooped the award after receiving recognition from members of the media having also been named official BBL MVP last season.

Crandall put up 13.1 points and 6.8 assists per game for the league and Cup winners as they go in search of another domestic treble in the playoffs.

“It’s an honour to be recognised by the British basketball media that cover the game,” said Crandall. “To be rewarded for the work that I have put in not just throughout the season but also during the off-season where I made commitments to better myself and my game certainly means a lot.”

Leedham-Warner topped the voting for the WBBL Player of the Year having helped lead London Lions to three pieces of silverware in a debut season back in the UK.

The GB legend averaged 15.7 points, 6.8 rebounds and 4.5 assists per game for the Lions during the WBBL regular season as they now chase a clean sweep of trophies having reached the semi-finals of the playoffs.

“Thank you so much to everyone who voted, I am extremely honoured and grateful to receive this award,” said Leedham-Warner. “Our team has worked so hard to perform everyday at a top level, so this award is a direct reflection of everyone involved from staff to players.”

Meanwhile, Rob Paternostro collected another BBL Coach of the Year award in the BJA awards with Pat Whelan recognised for the Best British Player in the BBL with the Pete Jacques Award.