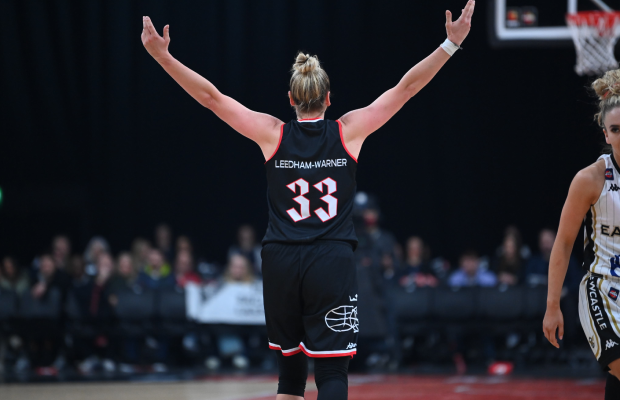 London Lions are the only franchise with two representatives in the 2021-22 Molten WBBL Team of the Year, voted for by WBBL Head Coaches, as the league announced today.

Lions’ dominant perfect season has been deservedly rewarded in the end of season awards, with a quartet also making the All-British team.

Leedham-Warner was the only unanimous selection to the team, having had a spectacular debut domestic season as the team’s leading scorer with 15.7 points along with 6.9 rebounds, 4.5 assists and 3.4 steals per game to help the Lions to three pieces of silverware so far.

Stewart joins her, averaging 10.4 points, 6.8 rebounds, 2.6 assists and 1.3 blocks per game, while shooting 57% from 2-point range, and picking up the Cup Final MVP award in January.

American guard Brooklyn Pannell finished as the leading scorer in the league, being the only player in the league to average more than 20 (20.3ppg), along with 5.3 rebounds, 2.8 assists and 2.9 steals per game (good for third in the league).

Last season’s league MVP Cat Carr makes the WBBL Team of the Year for the fifth consecutive season, extending her record as the player with the most appearances in league history, after leading Sevenoaks Suns to second place in the WBBL Championship and the finals of both the Play-offs and the WBBL Trophy.

She finishes the season averaging 16.4 points, 7.8 rebounds, 7 assists and 1 steal per game, while registering three triple doubles on the year.

American star Laken James helped Caledonia to their highest ever finish (sixth) and becomes the first player in franchise history to make the Team of the Year. She finished the WBBL’s third leading scorer, averaging 18.5 points, 7.6 rebounds, 3.3 assists and 2.9 steals per game.