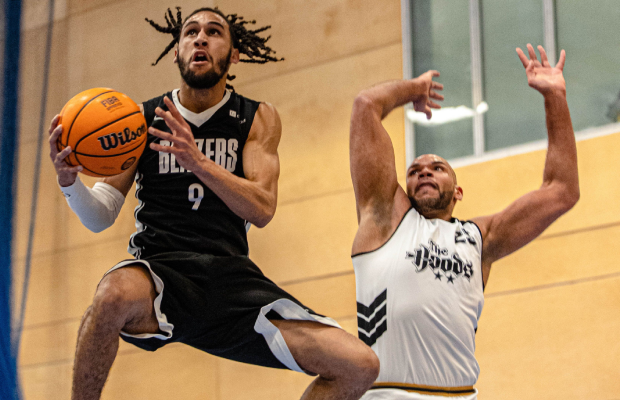 The NBL Division 1 playoffs begin this weekend after the 2021-22 regular season came to an end last week.

Solent Kestrels won another league title as they dropped just two games, while Leicester Warriors and Oaklands Wolves were unable to beat the drop as Essex Rebels secured their survival on the final round of games.

Here’s a look through the quarter-finals matchups:

Solent have been the dominant force in recent years in NBL Division 1 and they swept their way towards yet more silverware this season. Matt Guymon’s side went unbeaten on the road with their only defeats coming at home to Thames Valley and Hemel in another dominant campaign.

The Kestrels have threats all the way down the roster, led by rookie American guard Cole Gentry with 19.1 points and 5.8 assists per game. Orlan Jackman knows what it takes to win having previously enjoyed success in the BBL before joining Solent and is one of five players averaging at least 10 points per game.

Reading know they have their work cut out to make a run in the post-season, but can take comfort from being competitive in the two meetings between the sides this season. The Rockets finished with a winning record as they recorded 15 victories including their last three games having been involved in numerous close encounters over the course of the season.

The Rockets recently welcomed back club legend Danny Carter, while rookie American Tyler Cartaino and Canadian centre Meshack Lufile have both averaged 19+ points per game in impressive seasons. Reading also have the likes of Sam Toluwase, Lewis Champion and Reiss Pinnock at their disposal.

Nottingham went from a 2-17 season at the foot of Division 1 to winning 18 games and securing a home quarter-final in the playoffs 12 months later. The Hoods stated their intentions by getting their campaign off to a 4-0 start and despite losing three of their next four, they recaptured their form through the New Year and won their last four home games.

Experienced big man Mo Williams averages a near double-double for Nottingham on a team bursting with British talent. Johde Campbell has impressed as a regular starter with fellow guard Kyle Jiminez handing out 7.4 assists per game to rank second in the league.

Worthing will be dangerous opposition as they finished just a win behind Nottingham as they missed out on a top-four finish. They had started 14-2 before seeing their campaign derailed somewhat with a run of five losses in six games; beginning at the end of January.

Hafeez Abdul is Worthing’s leading scorer this season with 18.8 points per game, while Zaire Taylor recently dropped 60 points with his professional career drawing to a close. American guard Jarred Dixon has had a big first year in the league and there is plenty of experience throughout the roster.

Derby matched their third-placed finish from two seasons ago with their 19 wins the most in a D1 regular season since the 2015-16 campaign. The Trailblazers had dropped to 3-4 in November, however, they would win 12 of their last 13 to carry plenty of momentum into the post-season.

The third seeds are led by Malcolm Smith’s 19.7 points per game with Blake Bowman close behind in the scoring stakes having cut short his time in America to return home – just as Leighton Elliott-Sewell did. Raheem May-Thompson is a former winner in the BBL with Jonas Dieterich putting up 15+ points per outing having made a summer switch from Loughborough.

Hemel finished with a 16-10 record in sixth place as whilst they rank second in scoring amongst the eight remaining teams, they also rank second in points conceded. They recorded 100+ points in a game on 10 occasions during the regular season and were unbeaten when doing so.

Taylor Johnson has been a force for the Storm with averages of 27.2 points, 8.1 rebounds and 5.4 assists per game with at least eight 30+ point performances in the regular season. Greg Poleon has had another big year with 22.9 points and 10.4 boards per outing with Bode Adeluola returning to action to strengthen a team that also includes Sam Newman and Levi Noel.

Thames Valley finished with the same record as Solent in the 2020-21 season and while the margin was bigger this time around, they still had a strong season with 20 wins to their name in securing a third successive second-place finish.

Jakobi Bonner and Hakeem Sylla have been a dominant duo for the Cavs this season, while the experience of AJ Roberts and Blayne Freckleton has been a contributing factor to their success. Bonner had multiple 30-point games and only missed out in single-digit scoring on one occasion during the regular season.

Team Newcastle will certainly fancy their chances of pulling off the 7v2 upset, despite losing both matchups during the regular season – including a 37-point loss in February. They also dropped their final two games to finish 15-11 having won four of their last five prior to that as they pushed for a top-four spot.

Ronald Blain and Brandon Federici have both poured in over 20 points per game each as the leading scorers on the team, while David Moya leads the entire D1 in assists with 9.5 per game to go alongside 17.5 points and 7.2 rebounds. Martyn Gayle also averages in double figures in scoring and is shooting above 40% from three-point range, alongside Moya and Federici.

Stats via basketballengland.co.uk – not all games recorded.