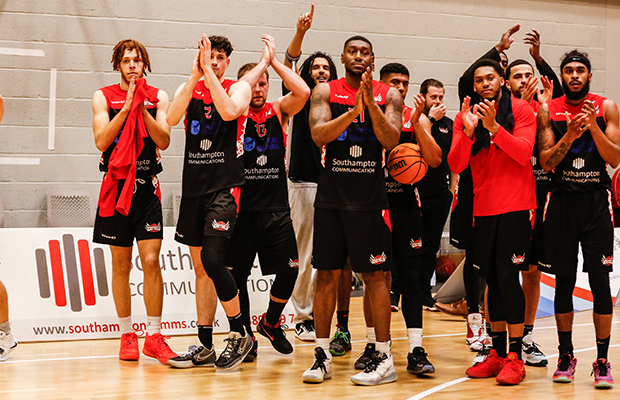 Kestrels’ convincing 119-44 win over Essex, combined with Nottingham Hoods’ 84-99 upset away win against Thames Valley Cavaliers secured another title for the Solent-based side.

“It’s been an incredible season with a huge amount of talent throughout the league this year,” Kestrels captain Elliot Dadds commented.

“To come out on top again this year is amazing. We had a dip in December but managed to stick together, play our style of basketball and get the job done in 2022. Now it’s time to finish the season up and lock in for the playoffs!”

Kestrels – now 20-2 on the season – add the league title to their National Cup final win from January, as they remain on target for a treble-winning season.

“What a feeling!,” guard Andre Arissol, who had 16 points against Essex today, added.

“I mean for me I was so grateful to join solent and be a part of the winning culture and competitive environment and to now have added such history and success makes it that much better!

“It’s just an honest reflection of what the club, our team and coaches live by and how it’s always about whats right in front of us not 3 or 4 steps, games away.

“Just so happy for solent and all the fans and behind the scenes staff because this is for everyone and just means so much to us to be giving the opportunity to play ball and watch our seeds blossom!”

Solent have four games remaining to play on the season.