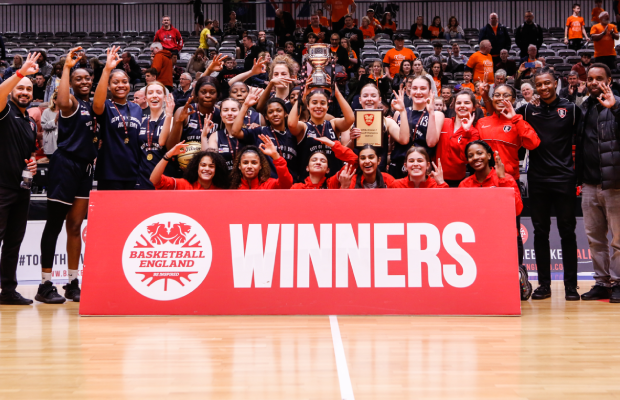 CoLA Southwark Pride celebrated a domestic double in WNBL Division 1 after edging out Solent Kestrels for a 55-53 victory in the playoffs final, on Sunday.

Jackson Gibbons – who was named WNBL D1 Coach of the Year – saw his side battle to victory as they avoided a second consecutive playoffs final defeat with a strong final quarter effort.

Isi Ozzy-Momodu collected 25 rebounds to go with eight points, while Funmi Amode posted a game-high 23 points including the go-ahead score inside a tense final minute to take the MVP award.

The Kestrels had a slender 13-11 advantage after the opening 10 minutes, despite only shooting 26% from the floor as 13 turnovers from CoLA halted their hopes of a fast start. There was nothing to separate the two teams at the half as they went into the interval level at 27-27.

Taylor Gaffney inspired a 7-0 start when play resumed as the seventh seeded Kestrels seized momentum with the gap hitting 10 points on the back of a three from Lauren Dabbs to make it 43-33.

However, CoLA battled back and their defence helped turn the game as they rallied in the fourth to close the gap. Amode’s score through contact made it 51-50 before drawing an offensive foul at the other end before another vital score followed to regain the lead in the final minute.

Faye Endean could only go one-of-three from the foul line with Emily O’Connell splitting a pair of free throws to narrowly increase the lead. Solent ran out of time before the buzzer as they suffered a second final defeat on the season as CoLA rushed to the court in jubilant scenes.