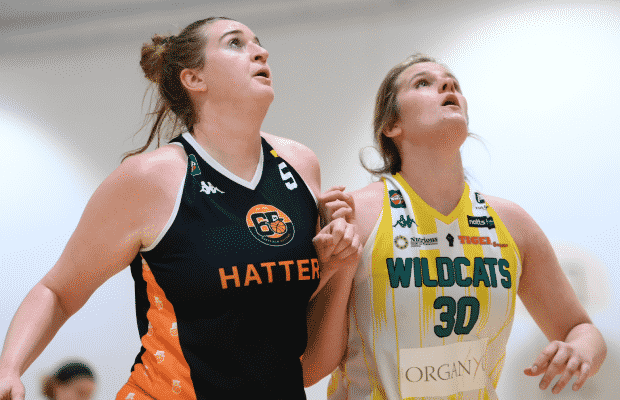 This weekend will mark a month to go in the 2021-22 WBBL regular season with plenty to play for over the coming weeks.

We catch up on what’s been happening around the league over the past few weeks with the battle for the title and race for the playoffs evenly poised at this stage.

What more is there to say? The Lions put on a clinic in Sunday’s WBBL Trophy final in Glasgow to collect a second piece of silverware on the season in beating Sevenoaks by a whopping 36 points. Holly Winterburn caught fire early on and was named MVP, while there was also the weekly reminder of how fortunate we are to have Jo Leedham-Warner playing in the WBBL.

London also had two big home wins over Durham and Newcastle in the league with Cassie Breen dropping 30 points in the Cup final repeat over the Eagles. Mark Clark’s side joined the Suns on a 14-0 record and the two teams meet for the first time in the league at the Copper Box on Friday night with the advantage in the title race on the line.

The Suns have been the dominant side in the WBBL for the past few years, so to lose a final by 36 points would no doubt have hurt. Len Busch’s side were right in the contest until late in the second quarter before having no answer for the all-round brilliance of the Lions – being outscored 39-13 in the second half.

Sevenoaks had not played since the start of the month when they beat Leicester on the road in the Trophy semi-final as they welcomed back Jamila Thompson. They have an immediate chance to avenge the defeat to London as they head to the Copper Box for an unbeaten league clash, though it would be some turnaround in less than a week.

Four wins in a row from the Hatters including the last two on an emotional weekend for the club as they mourned the loss of legendary founder Betty Codona OBE. Georgia Gayle handed out nine assists in each victory as Sheffield beat Essex by 15 at home before winning by 53 on the road in Gloucester as Helen Naylor top scored with 25 points.

They became the first team to 15 wins as they took a temporary lead in the official standings, though their title hopes were realistically ended with successive defeats to Sevenoaks last month. Sheffield host Leicester on Sunday with the chance to firmly consolidate their top-three spot and continue their momentum.

Leicester dropped their fifth league game last weekend as they were beaten on the road against Durham. The Riders are well placed in fourth place as they had taken their number of wins into double figures with a double-winning weekend over Oaklands earlier this month with Hannah Robb posting a big double-double at home.

They came up short of a final appearance after losing by 17 against Sevenoaks in the Trophy semi-finals with all their focus now on the regular season run-in. Leicester could still chase down Sheffield, but defeat on the road on Sunday could signal the end of their top-three hopes with two games against Sevenoaks also on their remaining schedule.

Caledonia have now won five straight league games to climb into the coveted top eight with six wins from their last eight since making a 1-8 start to their campaign. The most impressive victory came in the form of a 22-point home win over Manchester Mystics – a team they are now hunting down in the league table after joining Essex and Nottingham on seven wins.

Laken James led the way last week in Cardiff with 21 points and nine rebounds. Pride have seven games left and if they are able to continue their club-record winning streak away at Newcastle on Friday, then that would be a major boost to their post-season hopes before hosting the Rebels.

Essex had won three in a row in March before suffering a 15-point loss on the road against Sheffield last week to drop back below .500 in the league. The Rebels beat Newcastle by 25 home at home before holding off Oaklands as Megan Haines netted 17 points, and then eased past Gloucester in a 49-point victory.

A number of the team’s players competed in BUCS this season; winning the Championship title on Wednesday with Andrea Kohlhaas MVP and they will hope to take that winning feeling into the WBBL as they continue their stretch of games away from home with Manchester and London up next as they look to consolidate their top eight spot.

The Wildcats have not played for a couple of weeks after splitting their two league games earlier this month. After being knocked out of the Trophy by London, they responded with an eight-point win away at Cardiff as Praise Egharevba posted a big double-double before losing an overtime thriller against Sheffield.

Brooklyn Pannell – a two-time WBBL Player of the Month winner this season – hit a huge three to force the extra period, but the Wildcats came up short. They host London on Saturday with four of their next five at home as they have a chance to avoid being dragged deep into the playoffs race with Newcastle and Durham lurking outside.

Two contrasting results for Manchester this month as they comfortably beat Gloucester at home before going down to a 22-point loss away at Caledonia. Jeff Jones’ side remain fifth in the league, but just a win ahead of a trio of teams looking to track them down as the battle for playoff seeding heats up.

The Mystics were without Dom Allen in Scotland as they were held to just 53 points and they have an important couple of games coming up with encounters with Essex and Newcastle – two sides below them in the standings with nine games still to play in their regular season campaign.

Durham enjoyed a big win over Leicester last weekend to ignite their playoffs charge with three wins in four. Katie Bennett posted a double-double of 16 points along with 12 assists, while Goretti Hurtado netted 25 points with Americans Elle Hendershot and Jessica Wayne both in strong form.

The Palatinates’ fifth league win keeps them in the hunt for the post-season as they trail eighth-placed Caledonia by two wins with two games in hand. They can step up their pursuit this weekend if they win away at Oaklands, though they do have the likes of Sheffield and Sevenoaks to play in April in a tricky run-in.

The Eagles are in real danger of missing out on the post-season, less than 12 months on from their magical run at May Madness. The recent form of Caledonia has seen Newcastle drop out of the top eight and the two teams lock horns in a crucial encounter on Friday night in front of 1,000+ fans at the Vertu Motors Arena.

In between losses to Sheffield and London, they did beat Gloucester by 21 on the road as Maddy McVicar led the way with 20 points as they also welcomed back Jessica Eadsforth-Yates from a short injury layoff. The Eagles will be targeting this run of games with Durham and Gloucester also coming up in the next few weeks as they chase down the top eight.

It’s now 13 league games without a win now for the Archers with their hopes of reaching the playoffs fading fast as they remain bottom of the standings, five wins adrift of a spot in the top eight. Despite their worrying outlook, they do actually jump up in our rankings as they have look better placed to end their losing run in recent weeks.

Defeats to Durham and Caledonia were still costly for their chances and they cannot afford to do the same with upcoming home games with Oaklands and Gloucester in must-win territory. However, they first face a wounded Sevenoaks side at home on Saturday with their losing run looking set to continue another week.

Oaklands pushed Essex close at the start of the Month before going down to a nine-point loss and the defeat was followed by back-to-back losses against Leicester as they dropped to 3-13. Their last win came at the start of January when they defeated Gloucester and the two teams meet again this weekend.

It feels like a make-or-break weekend for the Wolves in terms of their top eight ambitions as they also take on Durham, but the academy team’s run to the semi-finals of the WEABL shows the future can be bright for the team with more opportunities to learn.

There have been positive moments in the Queens’ debut campaign, but they have lost by 50+ points in three of their last six games. Gloucester’s last win came at home to Nottingham at the end of January and they will look to end their losing run when they welcome Oaklands on Sunday.

Young guard Molly James has stepped up in performances off the bench including an efficient 17 points away at Manchester with Marlee Ball and Claire Abbott continuing to lead the way for an inexperienced group. The Queens still have eight games to play and even if they are to miss out on the playoffs, they will look to finish their first year on a high.