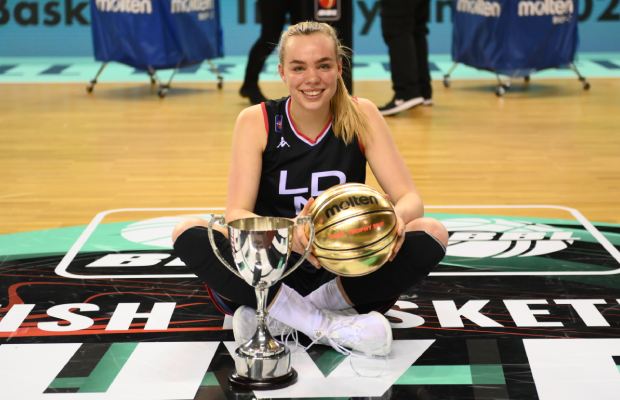 Holly Winterburn starred with an all-round display as London Lions sent out another statement to the WBBL with a dominant performance in Sunday’s Betty Codona WBBL Trophy final.

The GB Senior guard finished with 16 points, six rebounds, five assists and three steals as the Lions defended their title with a 72-36 victory over Sevenoaks Suns.

The Lions now have two pieces of silverware to their name and are still unbeaten in the WBBL Championship as their quest for a clean sweep ramps up.

“Oh yeah, we want all four,” declared Winterburn, when asked in the post-game interview with Sky Sports.

Winterburn scored 11 points – on 4-of-6 three-point shooting – in the first half as the Lions established a double-digit cushion before breaking away in the third quarter en route to a dominant victory.

“We just turned up the intensity,” said Winterburn. “We are who we are, we need to show it and make a statement to the rest of the league that we don’t want to be played with.

“We are so deep. We work so hard in practice; going at each other in practice every day and make each other better. It doesn’t matter who scores or anything, we’re just a team and want to get the win.”

London meet Sevenoaks again in the league on Friday night in an unbeaten showdown at the Copper Box with the victor claiming the outright lead at the top at 15-0.