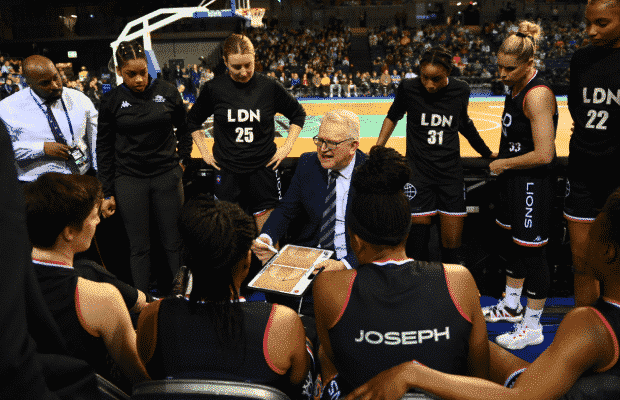 London Lions now have the only remaining perfect record in the WBBL Championship after they defeated Sevenoaks Suns in an unbeaten battle at the Copper Box, on Friday afternoon.

Mark Clark’s side moved to 15-0 in the league with a hard-fought 67-58 success – less than a week after beating the same opponents by 36 to win the Betty Codona WBBL Trophy in Glasgow.

London’s victory took their win streak to 26 games in WBBL competitions, which surpasses the previous record of 25 wins held by Sheffield Hatters from 2014-15.

“The record is meaningful because of the quality of the teams that we have passed – so that’s important to us,” Clark told Hoopsfix. “Hopefully, we keep adding to it and by the end of the year, we are still moving forward.

“When you look at records, you look at the people who held them before and Sheffield were a really good team at that time.

“We’re obviously pleased. We talked about it after the game, and now it’s up to someone else to come and chase us.”

The Lions’ last defeat came almost a year ago in April, 2021 when current player Holly Winterburn dropped 36 points in a road victory for Leicester Riders.

Of the 26 wins, 22 have come in double figures – a staggering eight by 50+ – but the margin did not matter on Friday and while it was far from their best performance, London took another important step towards more silverware having already won four trophies inside two seasons.

Shanice Beckford-Norton was a catalyst, particularly on the defensive end, with the Lions captain finishing with a team-high 15 points, while Jo Leedham-Warner overcame early shooting woes to hit three big triples in the fourth to add 14 points.

The home side edged a scrappy opening quarter, despite shooting 15% from the field, and their advantage narrowly grew to five at 33-28 going into half-time. London threatened to pull away again with an 8-0 start to the third, but Sevenoaks stuck with it to their credit as they hit back with the next 11 points to make it a two-point game.

The title race could still go down to the final game with the two teams scheduled to meet at Surrey Sports Park on April 24th. If they finish with the same record, head-to-head would come into play and Sevenoaks would require a win of at least nine points of their own.

Three-time defending league champions Sevenoaks drop to 14-1 in the league with the loss only their fourth in WBBL Championship play since the start of the 2017-18 season – an incredible 86-4 record in that span.

And, the key figure behind their dominance in recent years, Cat Carr saw the positives from the defeat as they look to continue to build over the coming weeks of the season.

“The bounceback from last weekend was pretty good for us and we’re putting the pieces together,” Carr told Hoopsfix post-game. “We showed a lot of heart, effort and hustle which was maybe lacking in the Trophy final.

“Our lack of communication on the defensive end probably cost us this game because we were right there in the scoring.

“These are the biggest games the league is looking forward to. We have to take it game by game and focus on getting better and hopefully by the end of April, it will be an even better game for us.”