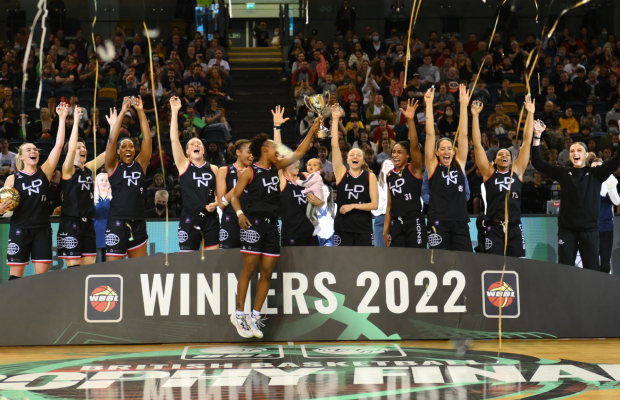 London Lions successfully defended the Betty Codona WBBL Trophy as they defeated Sevenoaks Suns 72-36 in Sunday’s final at the Emirates Arena, in Glasgow.

Mark Clark’s side have now won four straight finals as they match last season’s double-winning campaign with two pieces of silverware still to be decided this season with a historic clean sweep well within their sights.

Holly Winterburn set the tone with 11 points in the first quarter on the way to a game-high 16 points along with six rebounds, five assists and three steals as the MVP. Jo Leedham-Warner added 14 points, six rebounds and six assists with Shanice Beckford-Norton also in double figures with 11 points in another shining team display.

Winterburn hit a three to open the scoring in a 5-0 start with Sevenoaks out to a slow start. Reigning league MVP Cat Carr helped her side settle with successive assists before knocking down a mid-range jumper for the first lead in the middle of an 8-0 run.

However, GB guard Winterburn would score a further eight points with two more triples in an 11-0 run to close the opening quarter to make it 16-8 in the Lions’ favour – having forced seven turnovers in the first 10 minutes.

Renee Busch hit a pair of threes in the second as the Suns got themselves back to within a single point on multiple occasions. The Lions would ultimately score the last seven points of the half as Kennedy Leonard’s late three handed them a 10-point cushion to take into the interval at 33-23.

The start of the second half was all about Leedham-Warner; five straight points followed by the epitome of commitment with a fully dedicated dive to the floor, whilst still managing to find Winterburn. When Leedham-Warner connected with another three, all of a sudden it was a 20-point game amid a 19-2 run across quarters.

All of the built-up anticipation of this matchup was deflated by the class and dominance of the Lions with the damage done as the lead continued to grow.

Shanice Beckford-Norton scored either side of the quarter break as the gap hit 30 points and the Lions were able to cruise to victory and lay down a marker for the rest of the campaign – eventually doubling up their opponents in emphatic fashion.

Next up. The two teams meet again at the Copper Box on Friday with their 14-0 records on the line in a game that could go some way to deciding the league title.