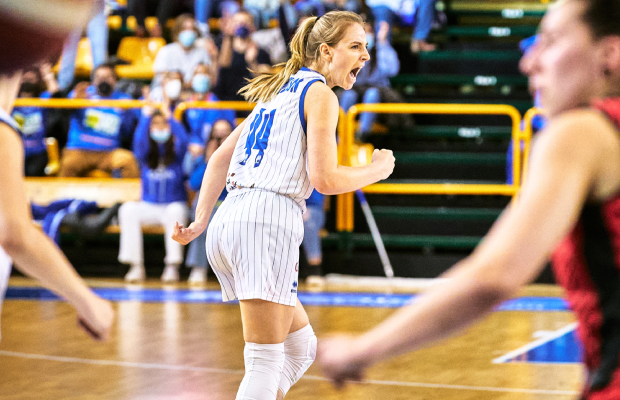 Karlie Samuelson helped Perfumerias Avenida come through a Game 3 decider in the quarter-finals as they continued their EuroLeague run, on Sunday.

The GB sharpshooter hit five triples in a 15-point haul as the Spanish side defeated compatriots Spar Girona 74-65 to complete a 2-1 series win and advance to the Final Four.

LFG!!! FINAL FOUR BACK TO BACK 💙 Love this team! @CBAvenida pic.twitter.com/lAZZHilFqf

Avenida had won the opening game of the last eight tie with a 77-63 victory at home before dropping the second with a two-point defeat on the road.

Samuelson is averaging 7.4 points and 2.9 rebounds per game as well as shooting 48% from three-point range in Europe’s top competition with bests of 17 points on two occasions in the regular season.

The fastest gun in the west 🤠

Avenida finished second in Group A with an 11-3 record, but effectively became the top seeds when perennial winners UMMC Ekaterinburg, of Russia, were expelled.

This is Samuelson’s third season in Spain with the club reaching the EuroLeague final last season – losing to Ekaterinburg. They will meet Hungary’s Sopron in the semi-finals for a second successive year, while Fenerbahce meet Prague.