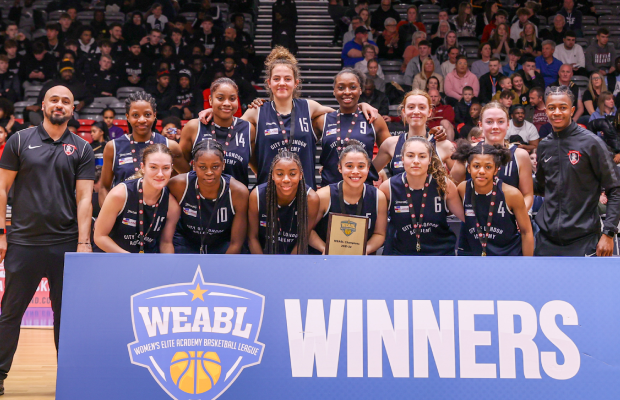 City of London Academy completed a perfect 2021-22 WEABL season as they claimed the title with a 71-49 victory over Nottingham Academy in the final at the National Basketball Performance Centre in Manchester, on Wednesday.

Jackson Gibbons’ side – who make up their WNBL D1 title-winning roster – proved too strong for the Northern Conference winners in a battle of the two unbeaten sides.

Emilie Black top scored with an efficient 21 points on 9-of-11 shooting along with four rebounds and four assists to earn the MVP award. Isi Ozzy-Momodu posted a double-double of 15 points and 11 rebounds, while Molly Lavin contributed six points, 13 boards and seven assists.

Macy Cook put Nottingham 5-4 ahead early on with the first three of the game, but CoLA responded with a 7-0 run to take control with the Wildcats’ star forward Praise Egharevba picking up a second foul in that spell.

Funmi Amode scored the final eight points in a 13-2 end to the first as CoLA established control with a 25-10 advantage. Egharevba scored seven straight points at the start of the second as Nottingham kept it competitive, but crucially committed a fourth foul just before the half with CoLA now 44-27 ahead at the break.

CoLA continued their defensive intensity in the third as they limited Nottingham to just six points as their lead ballooned to 28 points at 61-33.

Nottingham took the final quarter 16-10 as Egharevba finished with 19 points and 10 rebounds in 15 minutes, but the damage had been done and the CoLA bench stormed the court in jubilant scenes at the buzzer as they celebrated a perfect WEABL season.