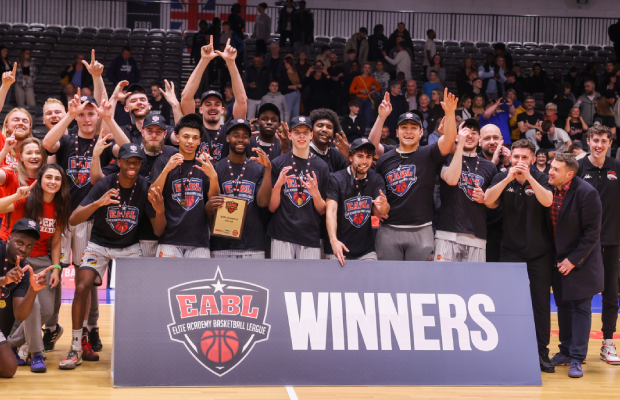 Charnwood were crowned EABL Championship winners for a third time after they defeated Myerscough College 83-74 in the 2021-22 final, in Manchester.

The Northern Conference winners were led by a 30-point performance from Victor Ndoukou, who claimed the MVP award – also adding 11 rebounds.

“It’s amazing,” Ndoukou told Hoopsfix after the game. “My teammates, we all deserve it we all fought very hard, first years, second years third years, we all just fought hard, I’m very happy…I’ve never won before, it’s a great feeling.”

“It’s so hard to put into words after such a crazy game, but what I will say is it was a great advert for British basketball. There were a lot of different runs throughout the game, luckily we had a run towards the end and our defence stepped up to get the job done. Super super proud of these guys, they’ve been working hard for 2-3 years now, I’m just super happy for them to get the win today.”

Kanu Gudza added 14 points and eight assists with Ben Woog posting 15 points and nine rebounds in the win, as Charnwood overcame 22 points from Zeki Cavli and 21 and 9 rebounds from MVP Bryan Akanmu.

Ndoukou scored the final five points in a 9-0 close to the first quarter as Charnwood moved ahead to lead 18-13. Zeki Cavli – who top scored with 22 points for Myerscough – and Juelz Robinson combined in the second to help regain the advantage, but Lane Campbell scored the final points of the half to make it 38-37 to Charnwood.

They made their move in the third and Daniel Hadley hit two triples late on to help establish a double-digit advantage as Charnwood took a 63-53 cushion into the final quarter.

Back-to-back baskets from Cavli capped a 10-3 spell from Myerscough as they closed to within three points with 6:45 remaining. They were even closer when Cavli’s triple made it a 70-68 deficit, but Ndoukou book-ended a pivotal 9-0 run as Charnwood pulled away to take the victory.