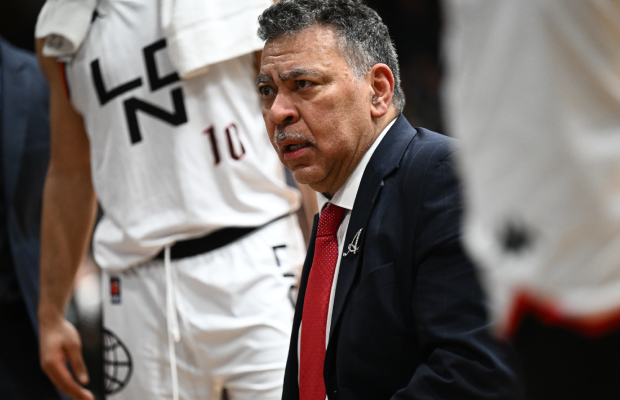 Vince Macaulay’s time in charge as London Lions’ head coach has come to an end, the club has announced.

A long-time advocate of British basketball, Macaulay has decades of experience within the game and this season led the Lions to a maiden victory in Europe – becoming the first BBL side to do so in 15 years.

The end of a legendary era pic.twitter.com/GDyXgEfvOv

An incredible day for @LondonLions – Euro games for Men and Women! I have to pinch myself, dreams come true. Thank you to everyone who has worked so hard over the years pic.twitter.com/nrP8Lo0gva

Barking Abbey coach James Vear will take over from Macaulay for the remainder of the season with the decision made over the weekend, Hoopsfix understands.

Macaulay remained part-owner of the club having been purchased by Miami-based investors 777 in 2020 not long after leading the club to a historic double in the 2018-19 season.

“All good things come to an end,” said Macaulay, via release. “I am happy to leave the club in the position it is in, off the floor in safe hands with our current ownership and on the floor to be undefeated at home in European competition and in a great position to win the three remaining domestic Trophies.

“The player pathway we have in place will surely be a hotbed for the growth of the next British Stars. I wish everyone at the club nothing but the best in the future – for me I will take time off for now, but for sure, the ball will keep on bouncing.”

The club statement added, ‘The London Lions will always remain avid supporters of Vince as he pursues his future endeavours, we wish to express our utmost gratitude for his history defining contribution to the club, and the sport.’

The Lions remain involved in the FIBA Europe Cup with a run of three home games to conclude their second round campaign, whilst they have a 3-2 record in the BBL Championship and are in the quarter-finals of the Trophy.