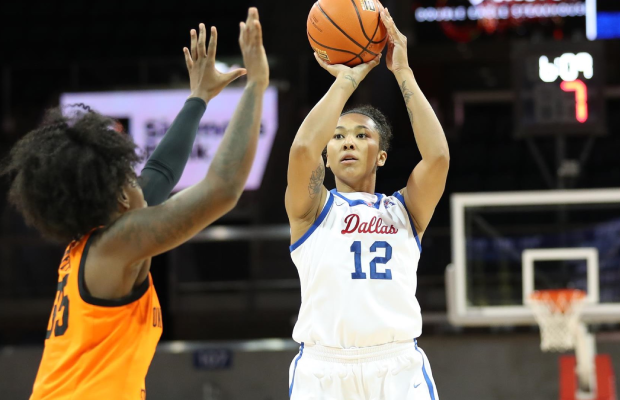 The 2021-22 seasons are underway for the Brits in college in the States and we look back on November’s action in our first recap.

Savannah Wilkinson has made a strong start to the season having set a SMU (3-4) school record with five straight double-doubles including 20 points and 10 rebounds at Arkansas. The redshirt senior then fired in a career-high of 24 points in a double-digit loss to Oklahoma.

After capturing her fifth straight double-double last night, @savwilkinson12 has now recorded the most consecutive – in ‼️#PonyUp ⬆️ #SMUWBB pic.twitter.com/nO5mA2jDew

Emerald Ekpiteta started the season with 13 points before netting 19 points against Florida Memorial with the graduate student also posting 15 points and 15 rebounds for a big double-double for FIU (4-3). Kyla Nelson also hit 19 points with 5-of-7 shooting from three-point range against Eastern Michigan with the British teammates averaging just under 10 points per game through seven games.

Meanwhile, Gabby Nikitinaite hit double figures in scoring in four of five games in November for SIUE (3-2) with a best of 15 points coming alongside five rebounds and two assists in a 62-71 road win at Illinois.

Reigning NCAA champions Stanford (5-2) have made a solid start with Hannah Jump scoring 11 points in an opening start before enjoying a ‘breakout game’ with seven threes in a 21-point haul upon a return to the starting lineup in the 86-67 victory over #2 Maryland. Jump is 18-of-41 from three-point range through November.

Loren Christie recorded 12 points and seven rebounds in 13 minutes against Canisius in a 60-point win for Buffalo (3-2), whilst also netting 11 points against Oklahoma and coming up with three blocks against Syracuse in an 88-79 triumph.

Khaleah Edwards hit double figures for the first time for St Francis Brooklyn (2-4) with 12 points at Rider in the Terriers’ first win. The graduate student then contributed 14 points, seven rebounds, three assists and four steals to an impressive win over Michigan State.

Milly Knowles produced a college career-high of 10 points in the opening game to go along with five rebounds and two blocks for Eastern Washington (1-3) and also had six points and six boards at Grand Canyon.

Maya Hyacienth continues a starting role at Rider (0-5) with a best of six points at La Salle in a tough start for the team, while freshman Simona Henshaw scored four points in a second outing for Florida Atlantic (2-4) as they opened with successive wins before four straight defeats.

Redshirt freshman Amelia Sandie marked a return on court after a long injury layoff with first points for Nicholls State (2-5) before netting a season-high of seven points in 20-point victory at Spring Hill with a first start also following.

Grace Heeps hit five triples in a 17-point haul to close out the month for Albany (1-3), whilst adding four rebounds and four assists in defeat at Boston College. Faye Parker opened with five points and four rebounds for Penn (4-3) in a win at Hartford.

Maya Price recorded 18 points, six rebounds, three assists, three steals and two blocks to help lead Eckerd (3-0) to victory against #16 Bentley. The former GB Under-20 forward then had a double-double of 13 points and 11 rebounds having also earned the SSC Defensive Player of the Week award. 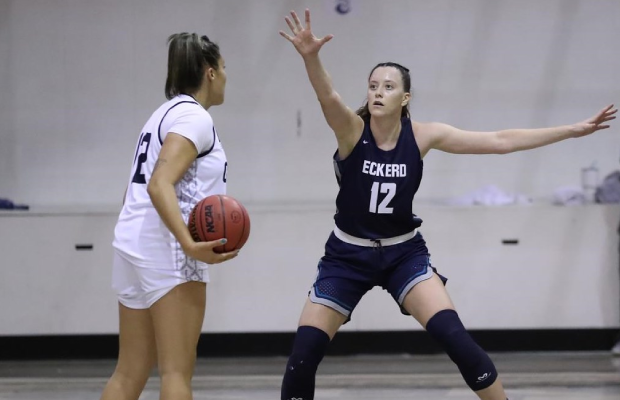 Senior guard Harriet Swindells scored 14 points in an opening win for Barry (3-1) with four triples before firing in 5-of-7 from beyond the arc in an 18-point haul. Swindells then had five assists in the final game of the month with Ashleigh Pink returning to the starting lineup having finished with back-to-back games with eight points.

Dani Lozzi had eight points, 10 rebounds and four assists in a five-point loss for Lynn (2-3) against #10 ranked Gannon. The senior guard also had a 6-4-6-3 line in a 59-52 win as Loie Webb hit two triples off the bench having opened with a season-high of seven points with freshman Alex Baker also on the roster as part of the Brit trio.

Charlotte Ellmore handed out seven assists in season opener for University of West Florida (4-1) before netting 16 points in 37 minutes in a nine-point home win, while Macy Spinks – also in starting role at Saint Anselm – opened in double figures with 11 points having averaged over 37 minutes of action in seven games, so far.

Freshman Lateisha Willis hit double figures in a second outing for Saint Rose (1-3) with 10 points against Goldey-Beacom (2-3) with Sarah Round netting 11 points in opposition in the 68-64 victory to follow a 13-point haul on opening night – firing in seven triples in the first two games.

Holly Davies scored 11 points for Newberry (1-5) and then went one better with 12 points to end the month with freshman Ella Pearson recording seven rebounds and two blocks in a first game before a scoring best of six points along with three rebounds and three assists at Mars Hill.

Senior guard Alix Henderson netted 12 points in a season before following with a best of 16 points for Point Loma (4-2) with eight points coming from the foul line. Shauna Harrison has helped Cal U to an unbeaten start with a best of eight points as well as 5-of-9 shooting from three-point range across the four games.

| NIFTY!
Alix Henderson with a beautiful dime to Allie Carreon for a three
Point Loma leads 7-5 over NNU, halfway through the first quarter pic.twitter.com/TxiAw3C3U6

Rebecca Morrison had a run of three straight games with 10+ points including 15 on 7-of-10 shooting against Franklin Pierce for Caldwell (4-3), while Shawnisay Millar started the season with 12 points before recording 15 on 6-of-11 shooting along with seven rebounds for Midwestern State (3-2).

Zoe Willis is back in action from injury for AIC (2-3) and had four points and five rebounds to close out the month, while former BA teammate Megan Sheret started the season with six points and four boards off the bench for Fresno Pacific (3-2).