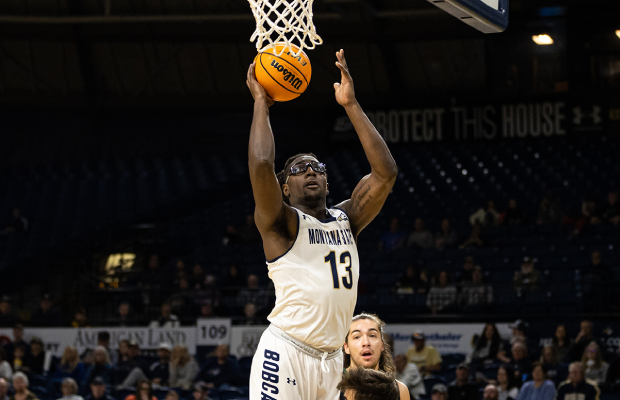 The first four weeks of the college season in America is already complete so we begin our monthly recap with a look at the top performing Brits from November.

Jubrile Belo had made another strong start for Montana State (4-1) to average 14.7 points and 6.9 rebounds per game through the opening month. The junior forward fired in 21 points against Rocky Mountain in the second game before a double-double of 12 points and 10 rebounds in a 69-66 success over Portland on the way to claiming the UIW Thanksgiving tourney title.

Amin Adamu had 14 points in the season opener before scoring 15 against Portland, while freshman Great Osobor had eight points and eight rebounds before posting 10 points and nine rebounds in a near double-double display.

Meanwhile, RJ Eytle-Rock had immediate success at Utah State (6-1) as they captured the Myrtle Beach Invitational with the graduate guard hitting 10 points for a season-high in the Championship victory. Former teammate Dan Akin recorded three double-doubles in five games for California Baptist (6-1) with 15 points, seven rebounds and two blocks in their season opener.

Tosan Evbuomwan has settled into the starting lineup for Princeton (5-2) with 12 points, nine rebounds and four assists in the second game and then had 16 points, five rebounds and seven assists against Minnesota in a double overtime defeat. The junior forward closed the month with a 19-8-6 stat-line in a 10-point victory.

Freshman Ethan Price has been a regular starter at Eastern Washington (3-3) with double figures in scoring in five of the six games in November. The former Ipswich forward had 11 points, 12 rebounds and two blocks at UC Davis before posting 19 points – on 8-of-9 shooting – along with 11 rebounds, four assists and two blocks in a huge 40-point victory.

Cameron Hildreth recorded 10 points, five rebounds, four assists and two blocks on debut off the bench for Wake Forest (7-1) with a season-high of 13 points on 4-6 shooting in the following game. Fellow freshman Matt Marsh made his first appearance with eight points in 12 minutes.

Sophomore Amari Williams had 10 points, seven rebounds, three assists and three blocks for Drexel (3-3) with eight points and six rebounds coming against Syracuse as Mate Okros dropped 16 points on 6-9 shooting, whilst also logging 39 minutes of action in an 87-90 overtime loss to Tulane.

Gedi Juozapaitis marked a season opener with 15 points as a regular starter for Georgia Southern (4-2), also netting 12 points as part of their four-game win streak. Zion Tordoff posted 11 points on 5-of-7 shooting in 20 minutes at Oklahoma for Houston Baptist (2-4), while Kayne Henry started with 15 points for Jacksonville State (3-3).

It was a strong month for Shaquille Walters after averaging 13.3 points per game for Northeastern (4-4) in November. Waltes had 10 points, seven rebounds as well as seven turnovers in the season opener, but bounced back with back-to-back 20-point games with 21 points on 7-of-10 shooting against Duquesne plus 20 points and nine rebounds.

Jeremy Sochan – now a senior international with Poland – has also made a bright start to his career with Baylor (7-0) with 10+ points in three of the first four games. The freshman guard scored 14 points against Nicholls State before recording six points and 12 rebounds in the following game admist the perfect start.

Jonathan Komagum scored seven points in an opening start for Sacramento State (3-3) before reaching double figures for first time with 13 points (4/6 FG) along with 12 rebounds and 3 assists in a 12-point win against UC Davis (2-3) with Caleb Fuller scoring a season-high 16 points in the loss. Fuller also had an 11-point game with seven rebounds off the bench having previously started alongside Ade Adebayo.

Graduate Robinson Idehen ended November’s action with back-to-back games in double figures; 13 points in an 18-point win and 11 points on 4-5 shooting, whilst also recording bests of 11 rebounds and five blocks in two separate games for UC Santa Barbara (3-2). Micheal Anumba has been a regular starter at Winthrop (3-3) and hit double figures for the first time with 11 points, five rebounds and two assists at Washington State.

Josh Uduje started strong with 13 points on debut for Coastal Carolina (2-2) on 6-11 shooting, while Sam Alajiki had an all-round display for Cal Bears (3-4) with eight points, five rebounds, three blocks and two steals in 28 minutes during November.

Tariq Balogun scored 11 points in the season opener for EKU (5-3) to earn a start and followed up by recording seven blocks against Ohio Valley in a 103-74 win. Harry Morrice also came up with seven blocks for North Carolina A&T (2-6) to go with two points and 10 rebounds in a first start, whilst later netting a best of five points at Stanford.

Eduardo Andre started out with a best of 11 points and seven rebounds for Nebraska (5-2), while Michael Folarin had seven points in a debut for Eastern Washington (3-3) and Daniel Ogoro had six points from beyond the arc before back-to-back five-point games for Youngstown State (2-3).

Jelani Watson-Gayle had a debut to remember for Fresno Pacific (6-0) with the graduate guard putting up 27 points along with 10 rebounds and three assists. With an average of 18.2 points per game for the month, Watson-Gayle also reached 20 points playing alongside fellow Brits Alex Ferguson and Sean Nealon-Lino, who had five points in the opener before recording four points, 10 rebounds and two assists in the next outing.

Senior guard Sesan Russell fired in 35 points to lead Florida Tech (6-1) to the Thanksgiving Tournament Championship having put up 32 points and six assists against Morris to boost monthly scoring average to 19.4 points per game. Russell also had 18-7-6 against Bendict, while Niall Harris had a best of nine points in an opening defeat.

Sam Grant started with eight points before posting nine points, four rebounds and two blocks against PR-Bayamon with Josh Mims netting a best of seven points in the same game.

Congrats to our Panthers who made the All-Tournament Team! 👏

Josh Apple started with a bang for ECU (1-4) with 22 points in the season opener, whilst also netting 19 points before producing a 16-point, nine-rebound performance in just 19 minutes of an emphatic 114-52 victory over Ark. Baptist.

Alex Distras netted nine points in 12 minutes for Augustana (6-1) before scoring eight points in the next game with fellow freshman Veron Eze scoring five points inside two minutes of their 91-75 success against Grand View in a strong start for the team.

Meanwhile, former Hoopsfix All-Star Classic MVP Tomiwa Sulaiman had a best of eight points in the final game of the month for unbeaten IUP (5-0) with Nathaniel Powell starting with nine points and six rebounds for UM-Crookston (4-3) before recording a season-high of 11 points in a 68-60 win.

Adria Amabilino-Perez ended November with 14 points personal having had 13 rebounds in the previous game in the only loss so far for Bentley (1-5). Wesley Oba posted six points and 10 rebounds to return to the starting lineup for Sioux Falls (4-3), but had a best of 15 points on 6-8 shooting along with nine rebounds off the bench in a defeat.

Elsewhere, Robin Bedford netted eight points on two occasions for Newberry (1-5) in a tough start with Callan Low scoring a best of six points in his role off the bench. Eisley Swaine and Sean Trumper also had monthly highs of six points for Findlay (4-2) and Franklin Pierce (3-3), respectively.